“My everyday life is not ‘legendary’, any more than yours is” -Tim Rushby-Smith 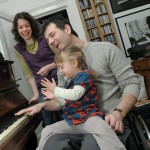 Why should taking my kids to the beach be a source of inspiration? There’s so much more we could talk about than the fact I’ve left the house.

I was on the beach with my family recently. As I made my way along the sand watching my kids in the surf, a man playing cricket with his son called out to me. “It’s great you’re getting out and about. You’re a legend. A real legend.”

I smiled back, somewhat baffled, and continued on my way. I was well up the beach before I had decoded his comment. My mere presence on the beach had so filled this man with admiration that he felt moved to place me in the company of Achilles.

I’m a wheelchair user. You may be thinking that being on a beach in a wheelchair is a significant achievement. In this case, it’s really not. The sand is firm, and I have an extra front wheel to enable me to push over the surface with relative ease. I visit this beach at least once a week.

I’m a sucker for praise. Compliment me on my sporting prowess or a recent article I’ve had published and I’ll be your friend for life. But forgive me for not accepting this praise as a compliment.

Not for the first time in the 10 years since I suffered a spinal cord injury, I was being praised for simply leaving the house. As someone with an apparent disability, this kind of compliment is all too common. It happens about once a month in the supermarket.

You may be thinking such comments are just people being nice, and that I should receive them with good grace. Perhaps. But when someone takes a moment to highlight that my very presence in the public arena requires what they assume is some kind of Herculean effort on my part, then I am reminded that my participation is considered by some to be exceptional. It makes me different.

By contrast some people have approached me on the beach and said, “It must be hard work pushing on the sand.” (It can be impossible sometimes, but this beach has firm sand so it’s not too bad.)

Others have said, “I’ve never seen a set up like that,” referring to my extra front wheel, “Did you make it yourself?” (Sort of. It’s cobbled together from other, less successful bits of kit. It works really well, and I take it everywhere when I travel).

I like these people. They have engaged me in a conversation, enabling me to share my experiences. There may have been an implicit compliment, but they have also expressed a genuine interest to learn about my day-to-day challenges. Our present-day Homer, on the other hand, places me in his new Iliad based on whatever assumptions he already has about life in a wheelchair.

Young said: “My everyday life in which I do exactly the same things as everyone else should not inspire people, and yet I am constantly congratulated by strangers for simply existing.”

In recent years, women have spoken out about the tyranny of “catcalling” and we no longer accept that men have the right to comment on the physical appearance of women they don’t know. In the same way those comments belittle women and reduce them to nothing more than the object of men’s sexual gratification, telling disabled people that they’re an inspiration reinforces the idea that our full participation in society requires exceptional effort. It assumes that our participation – or inclusion – isn’ t a reasonable expectation.

If I am on the beach with my kids, I prefer not to be reminded of what some people see as my “otherness”. If you want to say something, I’m happy for you come and talk to me. But please don’t talk at me.