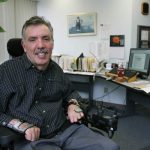 EDMONTON – We’ve been handing out High Fives to various events and great folks.

This week, though, we’re going to give a High Five to someone who deserves to be celebrated: Guy Coulombe.

At 17, Coulombe saw his life change radically near his hometown of Donnelly.

“We were driving and hit some loose gravel,” says Coulombe, now 47. “We weren’t wearing seatbelts because seatbelts weren’t a big thing back then. So the truck went one way and I went the other.”

Coulombe sustained a spinal cord injury and started his new life as a quadriplegic. But his life was not over.

Coulombe went through his rehabilitation in the Aberhart Centre, just south of the University of Alberta campus. While working hard at adjusting to living in a wheelchair during rehab, Coulombe met a counsellor from the Canadian Paraplegic Association. CPA is a nonprofit organization that assists people with spinal cord injuries. “That helped me see that my life could go on,” says Coulombe. He went after his dream of being a social worker and took a course at Grant MacEwan Community College. Even before he graduated, Coulombe was a success. “About a month or so before I graduated, I was interviewed for a job as a counsellor with the Canadian Paraplegic Association,” says Coulombe. “Then a week before I graduated, I got a call to say I was hired.”

He started working as a counsellor in 1985. On May 5, Coulombe celebrated 25 years with CPA.

“My father and my three brothers had long careers, so I guess it runs in the family that we’re lifers.

“I would like to work another five to seven years.”

He’s now the manager of client services and oversees a staff of six. Coulombe assigns his staff to people who have recently sustained a spinal cord injury.

On the morning we talked to him, he was going to do something he loves about his job. “I’m going to the Glenrose (Rehabilitation Hospital) to talk to people who are going through rehab after their injury.”

Over his quarter century with CPA, Coulombe has had an impact on many people. But some of his clients also left their mark on him. “I once had a client who was very isolated and the lights in his room were always off and he was very quiet,” says Coulombe.

“When I went to see him at first, he always had the covers pulled up over his eyes and didn’t want to talk or do anything.” In time, Coulombe saw his client start talking, get out of bed and finally leave the hospital to go home. “I hadn’t seen this person in about 15 years,” says Coulombe. “We were at a peer conference and he was with a friend and looked at me, and said: ‘There’s the guy that saved my life.’ I’ll never forget that.”