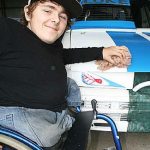 As 16-year-old Luke Watt expertly manoeuvres his wheelchair around his car, he lovingly polishes the bonnet with a cloth. Luke was born with no legs and has been in a wheelchair all his life, but he hasn’t let it stop him from doing whatever he wants. With help from his dad, the Year 10 student from Southern Cross K-12 School in Ballina has built his car from a bare shell into a four-wheeled racing machine. He is now the first person in a wheelchair to drive a junior sedan on the racing track at Lismore Speedway.

“My dad took me to the speedway when I was 10 and I knew I wanted to race cars,” Luke says. “A lot of people said I’d never be able to drive or race at the speedway, but look at me now. I can drive perfectly.”

Luke brought his car and his enthusiasm for motor racing to the Festival of Ability at the Alstonville Showgrounds last Thursday to celebrate International Day of People with Disabilities. His motivation and passion for car racing is infectious and as I chat with him I feel inspired by an amazing young person who is living his dream and won’t let anything get in his way. Luke shows me how quickly and smoothly he can escape from the driver’s seat out through the open car window.

“Before I could get my licence to drive the car competitively, I had to prove I could quickly get out of the car with my helmet and gear on in case of fire,” Luke says. “I can actually get out quicker than some of the other drivers.”

Luke’s manual Toyota Corolla Seca is his pride and joy and he has spent a lot of time modifying it so he can drive. The gear changing mechanism has been modified into a hand-operated lever. He has also cleverly built a hand-operated brake and accelerator mechanism out of metal poles and a pushbike cable.

“I’ve learned about metal work, building a roll cage, spray painting, electronics and I know a bit about how the motor works,” Luke says. “The people at the speedway help me and I’ve made a lot of friends there… Since my first season, I keep learning and getting better all the time.”

You can see Luke race his car at every Lismore Speedway meeting; just look for him in the blue and white number 94 Corolla with ‘Luke’ emblazoned on the front. He is now studying the road rules so he can get his L plates and learn to drive on the roads, just like most other 16-year-olds in Australia.

“I’ve gotten over a lot of barriers in my life and I’ve got a lot more barriers to overcome,” Luke says. “I won’t let anything stop me.”

This festival is about ability and as I wander round the pavilion, I see many happy faces. There are local musicians on the stage, percussion players, guitarists, singers and people dancing to the music. A sign interpreter is translating, and instead of clapping, people are waving their hands in the air so that people who are deaf can appreciate the audience applause. There are juggling workshops, face-painting and game playing everywhere. As I watch a young man in a wheelchair laughing gleefully as he fishes for plastic ducks in a pond, the sheer joy experienced by everyone here is evident.

Festival organiser Lee Clarke tells me the games are all designed to help develop co-ordination skills and that the juggling workshop is being run by a young man with a disability.

“This event is to showcase the abilities of people with disabilities who live and play in our communities,” Lee said.

This is the second year the festival has been run, and there’s more than a thousand participants taking part. With the support of local councils and the whole community sector behind it, Lee said the festival was an important event that brings people with disabilities together in a social setting, along with their carers, while letting them know how valued they are in the community.

Empowering people with disabilities to value their strengths and creating a society that is more accepting of people who do things differently are some of the goals the Festival of Ability is working towards.

“We are making a difference to the lives of human beings,” Lee said. “Things are changing slowly but surely.”

Toni is an activities officer with Ballina District Community Services and said that over the 18 years she has been working with people with different levels of ability, she has seen some big changes in how society caters for people with disabilities. Since the bus service in Ballina introduced wheelchair access to its buses via a ramp mechanism, many of her clients were able to travel on a bus for the first time and gain independence.

Peter Perry, CEO of Spinal Cord Injuries Australia, wants to remove barriers for people with injuries. He said there are 4000 people in NSW living with a spinal cord injury and many of them are “stuck in a vortex thinking no-one is out there for them”. He is working towards providing services for them as well as advocating for societal change to better support people whose lives have drastically changed. He believes that while there

are now more services available, there are still some major barriers in terms of access to buildings, especially in regional areas where many services are located upstairs.

“It’s important to get people who have spinal injuries to participate in society,” Peter said. “Some people are embarrassed and don’t want to go out in public and they disappear into their homes. We need more people on the ground to interact with them and make support groups.

“Little things can mean so much, like letting them know where they can go for a cup of tea or where there is a restaurant they can get into.”

As I’m talking to Philip Stacey, one of the newest volunteer support officers for Spinal Cord Injuries Australia, he is watching the doorway of the building in which we are standing. Every time someone in a wheelchair tries to come in the building, they are hampered by a 5cm high step and have to double their efforts to get over it.

“A little step makes a lot of difference,” Philip says to me. “I would have hurtled over that when I was younger.”

Philip has been in a wheelchair since 1975 and tells me he is classified as a “T6-T7 paraplegic”. As we watch the crowd, he gives me a running commentary on which wheelchairs are the best designs, much like I might assess someone’s new car. Philip is at the festival with Lexie, his wife of 27 years, and together they have raised three children and run a sheep farm. Philip can drive a tractor, is a local DJ and has a furniture-making workshop at Coraki.

“I try everything and anything,” Philip says. “I’ve even been around Mount Panorama on a mower.”

As a peer support officer who has spent many years in a wheelchair, he is hoping to empower other people with spinal cord injuries, give them advice and make sure they don’t isolate themselves by taking them on outings.

His advice to anyone in a wheelchair is that, if you build up your arm strength and put your mind to it, you can do anything you want. He also advocates for disability access in public buildings and often contacts local councils if he encounters any obstacles when he is in public places. One of the common access issues is public toilets.

“Everyone pees,” Philip says. “It takes more than putting a disabled sticker on the door to make it work.”

Philip explains that toilets in shopping centres with spring action doors that open inwards often don’t leave enough room for a wheelchair to turn around inside and people can get stuck; and often the hallways leading to the toilets are not wide enough for a wheelchair.

“The best public toilets are those with sliding doors,” Philip said “There’s still a long way to go, but it’s better than it used to be.”

I then wander over to the Byron Bay Herb Nursery stall, where I see nursery trainee Jonathon Lucas carefully planting seeds.

Byron Bay Herb Nursery manager Nick Thom tells me the herb nursery is a not-for-profit charity set up to provide employment opportunities for people with intellectual disabilities. The business has been empowering workers for 22 years, as well as providing them with income and a valued status in the community.

“It’s their business and we help them run it,” Nick says. “The workers have their own committees and meetings and we do things in the least restrictive way to encourage independence and self sufficiency. The workers also make great mentors for the new employees and a number of relationships have started between couples who met at work.”

Over on the main festival stage, Elvis impersonator Paul Jorgenson is singing Suspicious Minds, his white jumpsuit glittering with gemstones. After years of being a fan, Paul’s passion for The King led him to get up in front of everyone at Multitask one day and start singing. His performance was so popular that he now hires Elvis suits on a regular basis and performs at all sorts of events. As well as helping with organising this festival, he has been working at Multitask for 10 years and says he loves his work in the business services area doing mail outs and packing.

As I am leaving the Festival of Ability, the determination and passion of the people I have met has inspired me to think beyond limitations and to see the world through the eyes of others in a new way. Now every time I see a step, I will not just step over it, but will consider how we can make better design decisions in future to allow social inclusion for everybody, regardless of their level of ability.