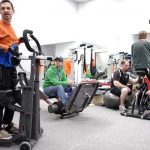 Chris Lesanko is standing and extending his arm for a handshake as the interview begins.

The small gesture wouldn’t normally be all that remarkable, but Lesanko is a quadriplegic who spends most of his day in a wheelchair.

His upright position is the result of a standing frame, a mechanical device that takes him from sitting to standing, putting his leg muscles to work and benefiting from blood circulation. The increased range of motion with his arms is the result of hard work.

And a lot of that progress was achieved in Carlsbad, Calif., at Project Walk, an intensive exercise and wellness program geared to those with spinal cord injuries.

Lesanko, a 27-year-old Regina university student, is one of several Saskatchewan residents who have travelled south to access the spinal cord injury recovery program.

“When I went down there, I knew this was the place I needed to be,” said Lesanko, a former top ranked Saskatchewan lacrosse player.

“It almost seems like you take the chair out of the picture,” he said, explaining how it differs from other rehabilitation programs.

He also appreciates that the cost of travelling to the States is often a barrier for people. So he decided to bring the training to them. The First Steps Spinal Cord Injury Wellness Centre — the first certified Project Walk provider in Canada — is now in its fifth month of operation in Regina.

Growing up in Sturgis, Lesanko and his buddy Owen Carlson had often mused about one day opening a gym. But, after leaving their hometown, Lesanko went off to Bishop College in Quebec on a lacrosse scholarship, while Carlson stayed in Saskatchewan to work on a bachelor of science degree, majoring in physiology.

When they met again, Lesanko was paralyzed from the chest down.

Lesanko was injured on March 24, 2005, in Lennoxville, Que. One of his lacrosse teammates had playfully intended to throw Lesanko onto a waterbed, but the then-second-year university student wound up striking his head on the baseboard, leaving him with fractures to the fourth and fifth vertebrae in his neck. He spent nine months in treatment at the Wascana Rehabilitation Centre, but the former athlete wanted more, and found his way to Project Walk.

Inspired by his experience in the States, in time Lesanko reminded Carlson of their dream of opening a gym — just not quite the one they had envisioned.

“After three years of him bugging me, I said, ‘I’ll come and make this work,’ ” said Carlson, First Steps’ director, lead trainer and board chair.

A non-profit organization was formed and fundraising got underway. The goal was to raise $300,000, but when they reached a third of that amount, Lesanko thought it more important to scale back in size and get the doors open.

The centre, at the rear of Dome Plaza, 4420 Albert St., is filled with specialized fitness equipment to get those with spinal cord injuries doing weight-bearing exercises.

At a cost of $70 an hour, clients work one-on-one with a trainer. Words painted on the wall above the equipment read: “Recognize potential, not limits.”

“We get you out of your wheelchair as soon as you get here and make you work,” added Carlson, who apprenticed at the U.S. Project Walk facility.

Currently, the centre has nine clients who put in between three and 10 hours a week. “We’ve had calls from all over Canada,” said Carlson, adding the fledgling centre is limited at this point in how many people they can accommodate. One woman came from Whitehorse, while he’s heard from two Nova Scotians who plan to come.

The goal is to bridge the gap between traditional rehabilitation methods and independent living.

“It doesn’t have to be about walking,” Carlson said, adding that it’s about improving people’s level of functionality.

He added that one never knows what might be on the horizon for those with spinal cord injuries. “We’re keeping the body healthy.”