Paralyzed Windsor bride-to-be determined to walk down the aisle 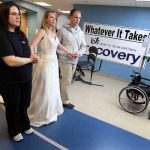 WINDSRO, Ont. — Jennifer Darmon rests her hands on her fiancé’s shoulders, looks into his eyes and takes a step.

Jack Johnson’s Better Together is playing in the background. “It’s not always easy,” the song goes, and Jennifer’s foot lands squarely on her fiancé’s.

The dance is clumsy at first, but it gets better. The song says that, too.

With no sensation from her hips down, it’s amazing that Jennifer is on her feet at all. That she will walk down the aisle April 16 and share a first dance with her bridegroom is miraculous.

Jennifer, 28, suffered a catastrophic spinal injury in a 2008 car crash. A vertebra broken and the nerves to her spinal cord shredded, she was told by a surgeon in London that she would never walk again.

But thanks to a will of steel and leg braces of titanium, she now spends hours at a time on her feet and out of her wheelchair.

Jennifer and fiancé Mike Belawetz, 24, practised their wedding dance Friday at the Detroit Medical Centre’s Rehabilitation Institute of Michigan. Jennifer has been going to RIM three times a week for two years. She started with the goal of getting stronger and more independent. After Mike proposed in June, she set her sights on walking down the aisle.

“I wasn’t going to let this wheelchair stop me,” she says, tucking her long, blond hair behind her ear.

Staff at RIM pulled together to help Jennifer reach her new goal. Her trainer — who is pregnant and due to have her baby 10 days after the wedding — will go to Jennifer’s house in Puce the day of the ceremony to help her stretch. Another trainer brought her own wedding dress for Jennifer to practise walking in at rehab.

As Jennifer stands at the parallel bars, the two trainers pull the crinoline over her head and help her into the dress, fastening it in the back with giant paper clips to pull the bodice tight against her fit upper body. The full skirt hides her braces and hot-pink running shoes. Behind her trails a long, beaded train like her own dress will have.

The sight of a bride draws staff from other floors in the centre. They gather in the doorways. They watch and smile.

When Jennifer worried it would be impossible for her to walk down the aisle without bars on each side of her, Mike suggested a plan. “Why can’t you just walk with people?” So on her wedding day at Mackenzie Hall, her father Alan will take one arm, and her younger brother, Kevin, will take the other.

The aisle at Mackenzie Hall is 40 feet long, Jennifer says, a testament to the fact that she has every detail of her wedding day covered.

That walk will be a piece of cake, she says. At rehab, Jennifer can be on her feet for nearly three hours straight.

With the walk down the aisle perfected, Jennifer and trainer Liz Richmond set upon tackling the wedding dance. They showed Mike their technique Friday, then let him try, first between the parallel bars for safety, then out on the open floor, dancing in a slow circle. “Turn left,” Jennifer tells Mike. “Like NASCAR.”

Mike is flummoxed at first. He presses both hands into Jennifer’s hips so she doesn’t lose her balance. Jennifer and Liz can dance in a ballroom pose, with Liz’s left hand on Jennifer’s waist and their right hands clasped in the air at shoulder height.

“Could you maybe just wear a tux and do this for me?” Mike asks Liz as he manages to get his foot under Jennifer’s again. “It’ll get better,” Jennifer says. “You can do this.”

Her encouragement is mutual. Mike has done his share of positive thinking for Jennifer over the years, she says, especially right after the crash.

The crash occurred on July 27, 2008, a warm, sunny Sunday. Jennifer, Mike and five friends were headed to Grand Bend for a day on the beach. It was to be a day of celebration — a going away party for one of the guys who was moving out of town and a congratulatory bash for Mike who was to start his new job as a paramedic the next day. It was about noon and the van was travelling down Oil Heritage Road near Wallaceburg. There was a curve in the road, with an intersection along it. A car on the crossroad failed to stop, hitting the van carrying the seven friends head-on. The van spun then rolled several times. It looked like crumpled tin foil when it finally came to rest on its side in a grassy area off the roadway.

Jennifer’s memory of the crash is fragmented at best.

She was in the middle seat, with Mike beside her. She had been reading a book, but isn’t sure if she had it open when she looked up and saw a dark-coloured car in the van’s path.

“I just remember thinking where that car was is wrong.”

Her next memory is of lying at the side of the road. “I remember my back really hurting.” She thought Mike, who had pulled her from the wreckage, somehow had his knee pressed into her lower back. What she was feeling was her broken spine.

“I could see my legs, but I couldn’t feel or move them.”

A helicopter arrived and airlifted Jennifer to Victoria Hospital in London. Her memory of spending a week in intensive care is equally foggy — faces of her family and friends, and Mike, who slept in his car in the parking lot and never left her side.

Jennifer explains that the force of the crash folded her body in half. The seatbelt across her lap prevented her from being ejected from the vehicle, but pinned her in a manner that caused her to fracture a vertebra in her lumbar area.

She underwent two surgeries in two days. Then came the devastating news that she would be paralyzed forever. She spent three weeks in hospital, one of them in intensive care. She was then shuffled off to London’s Parkwood Hospital for two months of rehab.

There, the emphasis was on her learning to use a wheelchair, she says. In contrast, the emphasis at RIM is to get her out of it. “They have a different outlook on what ‘recovery’ means,” Jennifer says.

Jennifer tells the story of the crash and her hospital stay matter-of-factly, her ever-present smile on her lips even then.

But at the time, her outlook wasn’t so upbeat, her mother Carla recalls, in an interview at the family’s home.

“She pushed everyone away,” Carla says. “She thought no one would want her.”

Jennifer figured her career as a counsellor with the John Howard Society would be over. Now she’s thinking of how she might get back to work.

She also figured her injury would send Mike running for the hills. Mike laughs at the suggestion. “She’s still the same person,” he says.

Mike proposed on June 8, four years to the day after their first date.

They met at a bank, where Jennifer was working as a teller. She had graduated from the University of Guelph with a degree in criminal justice and public policy and was working at the CIBC in Essex while she applied for jobs in her field. Mike was a customer who normally did his banking at the automatic teller. He admits that after spotting Jennifer, he found “excuses” to do his banking in person.

“He was so obvious,” says Jennifer. It didn’t take long for her to catch on to his charade that would begin with him using the bank machine to check how much money he had in his account before coming to her to make a withdrawal or transfer. “He’d come in three, four times a week.”

Week after week, she kept expecting him to ask her out. Tired of waiting, she handed him a slip of paper one day with her phone number on it. Their first date was dinner, drinks and an evening walk along the riverfront.

Jennifer says if there is one happy coincidence about the crash it is this: both drivers and every single passenger had the same insurance company. State Farm pays for her physical therapy at RIM, all her equipment and the necessary renovations to her parent’s home, including the installation of a wheelchair lift in the garage and a chair lift to the second floor. Insurance also helped her procure a sweet ride — a black Dodge Challenger outfitted with hand controls for the brake and accelerator.

“I just couldn’t see myself in a minivan,” Jennifer says.

Tiffany Jones, the DMC’s head of public relations, says the car is an example of how Jennifer makes the best out of her circumstance.

“She is such a positive person. When you meet her, you just fall in love with her.”

Jones says Jennifer is an inspiration to other patients with spinal cord injuries. RIM is featuring Jennifer in a series of promotional videos it has posted on YouTube. Called “Walk of Love,” it chronicles Jennifer’s progress up to and including the day of her wedding.

To watch Jennifer’s “Walk of Love” videos, go to http://www.youtube.com/user/rehabinstitute. A new video will be posted every two weeks.

A new deal for the disabled