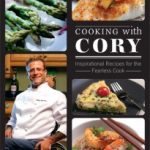 In the face of adversity, Cory Parsons not only committed himself to his recovery, but to helping others similarly reach for their dreams.

A motivational speaker, sports advocate and athlete, the Nanaimo resident has recently added cookbook author to his list of titles.

More than just a cookbook, Cooking with Cory: Inspirational Recipes for the Fearless Cook (published by North Vancouver’s Whitecap Books), references Parsons’ personal story of resilience. Twelve years ago, his life took a turn when, at age 23, he had a diving accident. While he’s come to terms with his life-changing spinal injury and made incredible gains, it’s been a tough road.

“In the book, I speak of a time when I’m in a hospital bed and . . . I’m frustrated because everything is difficult and new and not the way it was and I was quite sad and upset about it all,” he says.

Initially, Parsons was extremely paralyzed, almost to the point of being unable to speak. He recalls a nurse offering words of encouragement, telling him he’d one day regain his independence.

“While she’s telling me that, she’s feeding me a spoonful of soup because I’m not able to move my arms at all,” he says. He didn’t believe her, but as time wore on, Parsons’ level of ability did improve. Not only was he able to feed himself, he was able to get back in the kitchen and renew an early interest in cooking.

“I hit the bottom, broke my neck, and that left me in a wheelchair, but that didn’t diminish my passion for cooking or for food,” he says. In recent years, he’s been working on developing a cooking show and opted to write the cookbook.

“I wanted to not lay in a bed and have somebody tell me ‘You’re going to be able to do this or you’re going to do that,'” he says. “I wanted to be able to have something tangible in my hands. And I can show up at that hospital . . . when some new poor guy or girl is in there with a spinal injury and someone’s feeding them soup, I can roll in there and say ‘You know what? I’m not going to tell you that you can be independent and cook, I’m going to show you. Here’s a book, here’s videos and this is me, and I was right where you are 12 years ago.'”

Parsons hopes the book will have widespread appeal, not just to those with spinal-cord injuries, but to anyone who may be timid in the kitchen. “If I can do it, they can do it. That’s the message behind it.”

Clinical Studies Abroad: What Can We Learn?

Control a computer with your tongue