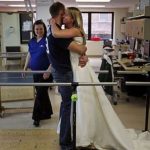 It was a warm, rainy night, and Mike Belawetz and Jennifer Darmon went for a stroll in a flower garden along the Windsor riverfront in Canada, looking at the Detroit skyline. He walked by her side, hiding a diamond engagement ring.

She propelled herself in a wheelchair.

Belawetz went down on a knee and took out a box with the ring. A man of few words, he didn’t say anything.

“I opened it up and I expected her to figure out what was going on,” he said, smiling. “I didn’t think I had to say anything else, but she squeezed it out of me. She made me ask. So I said, ‘Jenn, will you marry me?’ “

At that moment, Darmon had a dream: She wanted to walk down the aisle on her wedding day. That’s how she had always pictured it, walking with her father, Alan Darmon.

The date was set for April 16, giving her one year to prepare and come up with a plan.

But it seemed so impossible: How could a paralyzed woman stand up and walk?

The couple met in a bank. Darmon, now 28, was working as a teller. Belawetz, now 24, was a regular customer.

He was attracted to her beauty and attitude. Darmon was not a competitive athlete, but she worked out several times a week to stay in shape. She stood 5 foot 6 and weighed 107 pounds.

Darmon was attracted to his personality. He is calm and easygoing, even under pressure.

“He was really nice,” said Darmon, who lives in Belle River, Ontario, about 30 minutes from Detroit. “He was really polite and friendly. Obviously, his looks aren’t too bad. I can’t complain about those.”

After a few months of seeing each other in the bank, Darmon handed him a note with her phone number. “She’s sharp, bright, bubbly, fun to be with,” said Belawetz, who lives in Cottam, Ontario. “She is everything that is good.”

Two years later, Darmon and Belawetz were still together, and life was good and easy. It was July 27, 2008, and they were headed to the beach in Grand Bend, in a minivan with five friends. They were traveling on a two-lane road near Wallaceburg, about 1 1/2 hours from Detroit. Darmon sat in the middle row, wearing her seat belt.

Belawetz was turned around in his seat, playing cards with his friends. “Someone yelled,” he said. “I looked ahead and saw a car in front of us that we were about to hit. I saw the windows smash out around me.”

The van crashed head-on with a car and went into a roll, ending up on its side. Darmon was hanging from her seat belt, but she couldn’t move her legs. “My vertebrae in my back cracked or crushed or something,” she said.

No one else in the van suffered serious injuries.

Belawetz, who works as a paramedic, assessed the situation. He and a friend helped move Darmon from the van, carefully supporting her hips and back.

She spent more than a month in the hospital and had two surgeries. Her spine was fused together with rods and screws. “When they were in there, they discovered all the damage I had done to the nerve,” she said. “My spinal cord was spared, but all of the nerves that come out of the cord were all crushed.”

Darmon was told she would never walk again. She told Belawetz to leave her. She didn’t want to be a burden. “I said that probably a million times,” she said. “I didn’t want him to be stuck with someone who was in a wheelchair for the rest of her life. I didn’t think that anyone would want to take on all that responsibility. He refused to go anywhere. He stayed with me the entire time.”

Belawetz said he loved her. Whether or not she could walk didn’t matter to him. “I didn’t care about any of that,” Belawetz said. “She is still the girl I fell in love with. Why leave?”

After the accident, Darmon went to a rehabilitation center in Ontario, where she was taught to live in her wheelchair. In October 2008, she switched to the Detroit Medical Center’s Rehabilitation Institute of Michigan, where she is one of 55 patients at the Center for Spinal Cord Injury Recovery.

“It’s such a different attitude at the DMC versus anywhere else,” Darmon said.

The first step of her recovery in Detroit was learning how to crawl again. “It’s just like being a baby,” she said. “That helps your core get stronger.”

The therapists and trainers focused on her legs, trying to stimulate the paralyzed muscles. In the beginning, her goals were to get stronger and be more independent.

Early in her recovery, she wore stiff metal braces that she described as “Forrest Gump” braces. They were rigid and took a long time to put on, but that didn’t matter to her.

“To be able to stand upright and look somebody in the eye was fantastic,” Darmon said.

Darmon does therapy three hours a day, three times a week, and has traded the “Forrest Gump” braces for a set of custom braces made specifically for her legs. She can put them on in a matter of minutes.

“She’s doing really well,” said Phuong Vu, her physical therapist. “She has progressed to walking with her braces, but she still requires supervision.”

Darmon credits her success to the staff at the DMC.

“From the beginning, they were so positive,” Darmon said. “They push me when I don’t want to do something because they know I can do it and they want me to improve. They don’t let me get away with anything. They will push me hard. and I appreciate them for that.”

She invited three people from the center to her wedding, including Vu and Liz Richmond, her rehabilitation trainer. “When she walks down the aisle, it will be such an accomplishment for her,” Vu said. “For us, to see her achieve that goal, it’s going to be tears in everybody’s eyes. We are going to be elated for her.”

Richmond plans to go early and help Darmon stretch before the wedding.

“I know I will cry,” Richmond said. “I told her that she needs to invest in tissues. I will be so proud of her. Ever since I found out they were planning a wedding, it seemed like a long way out, but we set the goals early and she’s been meeting them.”

The wedding will be held at Mackenzie Hall, a historic courthouse in Windsor. Darmon’s father and her brother, Kevin Darmon, 25, will be beside her.

She will wear her leg braces under her wedding dress and hold their arms for support during the 40-foot walk down the aisle.

“They will be my crutches,” Darmon said. “It’s going to be great. For that special moment, I always pictured walking with my dad, so it’s an extra bonus that I’ll have my brother, there, too. For them to be able to help me walk down the aisle, something that I never thought I would be able to do since I was injured, is amazing. It’s fantastic that I will be able to do that.”

Darmon says her injury has strengthened her relationship with her fiancé. They spend so much time together now.

“He’s been fantastic,” Darmon said. “He is there no matter what. I couldn’t imagine having anybody else with me through all of this. He’s the perfect person.”

Belawetz has seen his fiancée training at the rehabilitation center in a wedding dress, but not the gown she will wear on their special day.

“Obviously, a lot of that surprise is gone because I’ve seen her train to do it wearing a dress, one to two times a week,” Belawetz said. “But I’m excited. She is a beautiful girl. I can’t wait to see her in the dress.”

Some other details are still being decided. They haven’t figured out how she will walk up the aisle after the ceremony. “We haven’t really discussed that yet,” Belawetz said. “Maybe I’ll just pick her up and carry her out. We’ll see.”

They have been practicing their first dance as well.

“That is much trickier,” Richmond said. “This is all physics. We are changing where she is holding onto him. She is holding on Mike’s shoulders, not down low. He is helping her.”

“It’s not easy at all,” Darmon said. “That’s probably one of the hardest things we will have to do that day.”

But the spirit of the dance is all that matters. Their first dance will be to the song “Better Together” by Jack Johnson.

And the lyrics mean everything to them:

“It’s not always easy and sometimes life can be deceiving. I’ll tell you one thing, it’s always better when we’re together.”