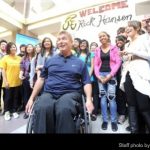 Screams and cheers filled the halls of Rick Hansen Secondary School today as the man for whom the school is named wheeled down the atrium, shaking hands with students and teachers.

After being introduced by MTV’s Aliya Jasmine, Hansen told the cheering students, “I’m so blown away by this.”

A quarter century after he led the Man in Motion Tour, Hansen issued an invitation for all Canadians to join him in an anniversary celebration.

“We really need to see what we can do to find a cure for spinal cord injury,” Hansen said, and “to make our communities and the world more accessible and inclusive for people with disabilities.”

To celebrate the 25th anniversary, Hansen announced that a relay will take place to retrace the Canadian segment of the original Man in Motion Tour. It begins Aug. 24 in Cape Spear, Newfoundland and concludes next May 22 in Vancouver.

Rather than featuring Hansen in his wheelchair, it will consist of 7,000 people who’ll carry the newly-introduced medal provided by the Royal Canadian Mint in honour of Hansen.

James B. Love, chair of the mint’s board of directors, said: “Rick Hansen has inspired millions in the 25 years since his historic journey and the mint is honoured to have had the unique opportunity to immortalize his legacy by crafting the unforgettable Rick Hansen Medal.”Participants will cover a total of 12,000 kilometres, travelling through 600 communities, visiting every capital, province and territory, and within reach of 70 per cent of the Canadian population.

By involving all communities along the way, “you can take it from that one individual journey to a national commitment,” Hansen said.

Any Canadian older than 13 years of age can apply to become one of the medal-bearers.

The first chosen was Rick Hansen student Amna Ansari, 17, who was recognized for her outstanding community involvement and her role as a difference-maker at the school.

“I had no idea. I mean, of course I was hoping for it, but I never would have thought,” Ansari said. “It’s amazing. I had no idea I would get to wear the medal right away. It’s an honour.”

Despite a busy itinerary, Hansen took every opportunity he could to spend time with the students, having his picture taken with them and signing autographs.