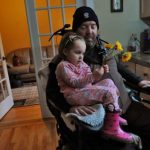 If Michael Jones did it, he knew he’d be spent for the day. He’s a quadriplegic with some sensation and bits of movement. But that morning as his nearly 3-year-old daughter, Liliana, climbed on him in the hospital bed he sleeps in at home, Michael just wanted to be a dad.

So he lifted his arm at the elbow, holding it somewhere between a 45- and 90-degree angle. Liliana threw her weight against his arm, and he pushed her back onto the bed, the way dads horse around with their wide-eyed, apple-cheeked toddlers.

And it’s the new normal.

The new normal is what Michael’s wife, Lisa DeStaso-Jones, craved after months of unknowns and medical transfers. She didn’t know whether Michael would survive after his neck bore the weight of a collapsing rugby scrum during a February 2010 tournament in Florida. Over the coming months, Michael charged at therapy with the same fight he’d always shown on the rugby field. He’d spent three weeks in the ICU of a Florida hospital where he was on a ventilator, something doctors thought he might depend on for the rest of his life. He could not move. He could not speak. He could not breathe on his own.

He was at Kessler Rehabilitation Center in New Jersey for 100 days, where he slowly shed the ventilator and was able to shrug his shoulders. He spent seven months at the Good Samaritan Lutheran Health Care Center in Delmar, where the physical and occupational therapists made Michael’s rehabilitation their mission.

And on Valentine’s Day this year, the 45-year-old with an easy smile that softens his bulldog exterior came home to the Delmar bungalow he loved so much. They weren’t sure it was possible. But a wheelchair-accessible addition was built thanks to the coordinated efforts of Keystone Builders and the Jones’ neighbor, Katrina Bolen, something Lisa calls “Delmar’s version of ‘Extreme Home Makeover.’ ”

There were so many transitions, and Lisa just wanted to be settled, preparing for a life with her family that was not the one she imagined when Michael used to hold his baby girl.

The new normal has been learning to live with a personal care aide at Michael’s side 24 hours a day. It’s been having to become her husband’s health care advocate, pleading for equipment and having to fight when the system wanted to reduce Michael’s aide coverage from 24-hour care to 14 hours a day.

And it’s been about having crushing exchanges with Liliana.

Meanwhile, her husband proves his body has changed, but his heart has not. At first, Lisa refused to believe he could be dealing with the paralysis as well as he was. But she’s realized, she says, he’s a simple guy cut from cloth they don’t make anymore. He’s a guy who though he can control his wheelchair only with a joystick under his chin, and whose body can’t regulate its own temperature, will say things like, “I actually consider myself lucky. A broken neck? It could kill you.”

“I have asked why,” Lisa says. “But Jonesy has never. When I ask him, ‘Why you, the most decent human being I have ever known?’ he contends we will learn something from this. To him, moving a finger might be his Mount Everest.”

Michael gets episodes of dysreflexia almost daily. It’s a common condition with spinal cord injuries where, because of communication problems between the brain and nerves, anything that’s amiss — from a kinked catheter to a bunched-up sleeve on his arm — can send the body into fight-or-flight mode. Michael’s blood pressure soars as they scramble to figure out what’s causing the response and fix it.

The injury also means he has reduced lung function and sleep apnea and has to wear a breathing mask at night. The overnight aide makes sure it doesn’t slip off, or he could die.

But this is the new normal. Michael’s determination has always been the same. Jim Sloan, Michael’s physical therapist, says he has to pull him back like a racehorse or Michael will work so hard he’ll exhaust himself.

He can move his fingers now. And it’s getting him closer to another goal: to get a joystick for his chair that he can control with his hand instead of his chin.

He works to use his “standing table,” equipment that holds him in the standing position for 15-20 minutes a day. He does physical or occupational therapy four times a week. He and Lisa wish their health coverage gave them more, but they’re grateful they have that.

Michael dreams of a spot at Project Walk, an exercise-based spinal cord injury recovery program in California. It’s too far to travel now, but Lisa says she’d like to try to get Michael into a similar program in Massachusetts called Journey Forward. She’s hoping some of the money raised by the upcoming golf tournament to benefit the Michael Jones Supplemental Needs Trust could go toward that goal.

He wants to work again, even if it’s something far removed from his old state Thruway Authority job. He wants to learn to use the adaptive technology that would allow him to answer his own emails. He wants to hold his little girl.

Lisa wants to find normalcy in the new normal. She dreams of a time when going to the playground isn’t overwhelmed by the task of scheduling the trip between shift changes for the personal aides, when they know Michael can’t motor his wheelchair into the mulch near the swings or it will get stuck. She dreams of going out to dinner — something they did for the first time just a couple of weeks ago — and not feeling awkward about the aide who sits by her husband, feeding him with a fork.

Michael dreams of feeding himself. Looking for his next goal, that’s the man he’s always been.