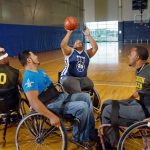 They weren’t bungee jumping or having a “hey, watch this” moment, weren’t misbehaving or daring fate.

They were simply living life.

Robert Estes, 36, of Canton was riding with his brother to get breakfast. Antonio Wright, 36, of Byram was returning from visiting friends in Memphis. Robert Donerson, 32, of Vaughan was driving home from work. Robbie Sullivan, 36, of Wesson was deer hunting from a tree stand.

In a split second, their ability to walk disappeared, probably for the rest of their lives.

Now all are members of one of two Jackson-area wheelchair basketball teams, the Magic and the Rollin’ Tigers.

All are full of smiles and a healthy dose of competitive fire.

“I’ve got a shot that can’t be blocked,” says Donerson, who played basketball for four years at Yazoo County High School. “It’s the way I’m able to lean back in my chair … sort of like a fade-away jump shot. It’s hard to stop me once I get going.”

He is not cocky. He is confident.

This is a man who, at the age of 19, dozed off behind the wheel of his blue Delta 88 Oldsmobile at 2 a.m., exhausted after working shifts at two jobs. His car veered off Linwood Road in Yazoo County and flipped. Donerson’s seatbelt snapped, and he was thrown from the vehicle. He landed in water.

“I was trying to make it to the bank of the road and went under,” he recalls. “I came back up, swam a little farther and went under again. I came up a second time and was about to go under again … but I caught hold of some grass on the side of the bank. And I held on until help finally arrived.”

The last thing they seek is pity.

“We’re athletes,” says Estes, captain of the Magic. “We’ll play exhibitions against people who still have use of their legs, and they’re like ‘Playing in a chair is a lot harder than playing regular basketball.’ ”

The Magic and the Rollin’ Tigers are members of the National Wheelchair Basketball Association. Each team plays about 12 tournaments a year throughout the Southeast, plus numerous exhibition games. They practice at least twice a week.

Reflections on the 50th Anniversary of Joni’s Diving Accident