The secret of his success 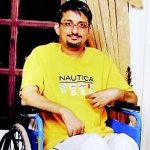 He can’t move a muscle below his neck. But that hasn’t stopped Girish Gogia from being a star interior designer. Here’s how he did it

Girish Gogia was only 29 years old when he suffered a cervical spinal cord injury while diving into the sea in Goa. The incident left him paralysed below the neck. As the spinal tissue is not capable of regenerating itself, a spinal cord injury is irreversible. Superman star Christopher Reeves suffered from a similar injury for almost a decade before he passed away.

After 11 years of living with it, Girish has gathered many tricks for overcoming obstacles and staying positive. As a self-employed interior designer, he has completed 11 projects in 11 years, including the colour scheme of the Mumbai Central and Churchgate railway stations.

Circumstances have taught him that no problem is bigger than one’s capabilities. He shares his mantras:

After the accident, when Girish came to consciousness and learnt of his state, he plummeted into depression. “I needed help with everything from brushing my teeth to going to the toilet. I was shocked and wanted to kill myself. I cursed god and asked why me? I was perpetually irritable and angry. I would talk rudely to visitors and my parents.”

For two weeks, Girish remained miserable. Then one fine day, he remembered the African villagers he had encountered on his numerous travels to the continent, as he used to do the business of importing teakwood and timber. “They didn’t have clothes or food. It gave me hope that if they could survive in such miserable conditions, I could at least attempt to survive mine,” he says.

“The human brain has 60,000 small and big thoughts in a day and most of these are useless. It was impossible for me to monitor all my negative thoughts. So I decided not to think about death.”

Find something that you really love to do. “It is important because it will take your mind off those repeated patterns of negative thoughts,” he says. “I found solace in talking to plants. I would speak to them for hours. I saw they too faced so much difficulty. I realised no matter how low you are feeling, doing what you love doing will give you an instant dose of feel-good energy.”

Girish began thinking of the resources available to him which he could utilise. “I was still young and had a strong immune system. I had a healthy brain. Rather than paying attention to what was against me, I started focusing on things that favoured me. I was passionate about interior design. I had a civil engineering background. I had ideas that I wanted to experiment with and I had friends who could help me out with contacts for projects,” he adds.

If you can visualise something, you can achieve it. Girish would spend five hours daily visualising his designs. He got his first project for a 2,000-square-feet bungalow when a common friend recommended him to the CEO of an engineering company. “The CEO was initially sceptical. I told him just one thing: Pay me only if you like the final design,” he says. Girish visited the site on his wheelchair, conceptualised the design and hired a draftsman to put it on paper. He was given a deadline of six months. He completed the job in five.

“Coin a mantra that will take you closer to your goal, such as, I am confident and full of potential. Focus on it and repeat it till you believe it. The problem with us is that we keep repeating thought patterns. Most people don’t stop to think of a solution for a problem. When you meditate, you become rational rather than getting angry about them.”

Girish has many projects — designing hospitals, showrooms, offices or homes. “I am so involved with my work that I do not have time to think of my paralysis. By the end of the day, I don’t have the energy to think about it because I focus on my work.”

Does she have a disability or just an injured leg?