Keefer family of Newberry Township to be featured on ‘Extreme Makeover: Home Edition’ on Friday 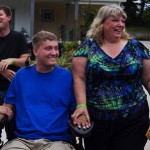 Brian Keefer expects a lot of tears when he and his family watch the episode of “Extreme Makeover: Home Edition” on Friday, accompanied by hundreds, if not thousands, of the volunteers who helped rebuild their house.

Keefer, 24, was paralyzed by a gymnastics accident in 2008. His upbeat attitude and close family caught the attention of the Extreme Makeover crew, who spent a week in June rebuilding the family home in Newberry Twp. to help Brian become as independent as possible and, perhaps, someday walk again.

Not even the Keefers have seen the episode yet, and they have not been allowed to invite outsiders into their home until the episode airs in order to keep the element of surprise.

Musser Home Builders, the general contractor for the project, is hosting an Airing Party from 5 to 10 p.m. Friday at the West Shore Evangelical Church in Mechanicsburg, a megachurch with 1,400 seats and sophisticated audio-visual technology. The episode on the Keefers will air from 8 to 10 p.m. on ABC. All are invited.

Contractor Jeff Musser said about 4,000 people helped build the home, and he expects many to come to Friday’s party. Two hundred and fifty companies donated supplies.

“It’s amazing to see a community come together in droves and thousands and thousands to help someone they’ve never met before,” Musser said. “It makes you look at people differently. There are a lot of good hearted people in the world. When you look at the news, you can lose heart in society. I liked being part of a bigger picture where each did a small piece for a common goal.”

Brian has been at Lock Haven University with his father, Steve, completing his degree in recreation management. His father took early retirement to become Brian’s caregiver at the university. The Extreme Makeover crew also fixed up his dorm’s recreation room.

Next semester, Brian will start an internship before searching for a job, hopefully helping other people with spinal cord injuries.

Brian and Steve get home about once a month, and Brian said his new house is fantastic.

“It is going to be able to help me so much,” he said. “The technology is one of the biggest things. A lot is voice activated. I can get through doorways, turn on the TV, switch on the lights. Mom and Dad don’t have to be hanging around all the time asking ‘What do you need?’”

The centerpiece of the house is the therapy room, which includes a pool designed with the help of the Kennedy-Krieger Institute in Baltimore, where Brian has been going to the International Center for Spinal Cord Injury. Brian said his muscles have been getting stronger with his therapy at home and at school.

Steve Keefer said Brian goes to classes every morning at Lock Haven, then spends from 1 p.m. to 5 p.m. pedaling 12 miles on his stimulation bicycle and another 2.5 miles pedaling with his arms. In the evening he studies or hangs out with friends.

The therapy has improved Brian’s trunk control and keeps his muscles from atrophying, Steve Keefer said.

“It keeps them tuned so when his nerves come back, he will be able to walk again,” he said. “It’s not a matter of if, but when.”

While Brian and Steve are at school, Brian’s mother, Dawn, has been working to make their new house a home again, unpacking their possessions, bringing in their former furniture, arranging her doll collection and hanging pictures.

Brian said he is looking forward to inviting his friends over.

“A lot of friends wanted to come and hang out with me, but I couldn’t have them over,” he said.

The family is also looking forward to some quieter times once the publicity dies down. Brian said people come to talk to him all the time at school and seem to know a lot about him, but he is embarrassed when he doesn’t even know their names. He said the year has been hectic, but great.

The Keefers and others involved with the Extreme Makeover project said the experience has been life changing.

“My family has grown so much,” Brian said. “We realize how strong our community is. People are there for us. We’re not in this alone.”

By MONICA VON DOBENECK, The Patriot-News