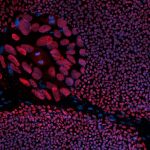 The world’s first test on patients of a treatment for spinal cord injury using human embryonic stem cells is so far proving safe, one year after the first of four patients received injections.

The treatment, developed by researchers at UC Irvine, involves injection of neural cells derived from human embryonic stem cells into the site of a spinal cord injury within seven to 14 days — known as “acute” injuries, as opposed to longer-term injuries known as “chronic.”

“I’m pretty happy that the treatment appears to be safe at this point,” said UCI stem-cell researcher Hans Keirstead, who is not involved in the patient trials but developed the treatment with his colleague, Gabriel Nistor.

The treatment has the potential to restore function below the site of a spinal cord injury, perhaps allowing patients with paralyzed limbs to walk again. It has reversed paralysis in laboratory rats.

And the first patient to receive the injections, Timothy Atchison of Alabama, reported feeling in his legs after the treatment. While the identities of the patients involved is kept secret, Atchison came forward to tell his story to the Washington Post.

Keirstead has said Atchison’s report was exciting but anecdotal and not scientifically verified; following typical practice, the first stem-cell trial is intended to check the safety of the treatment.

A second trial will determine its effectiveness.

The stem cells are derived from embryos otherwise destined to be discarded by fertility clinics, but such treatments still can generate controversy among those who oppose the use of stem cells.

Embryonic stem cells have the potential to become many different kinds of cells, raising hope that Parkinson’s, Alzheimer’s and other diseases could one day be treated with them.

In rats, the cells were shown to form new tissue at the site of spinal cord injury, in some cases restoring motor function.

In this case, human neural stem cells from aborted fetuses donated by parents are being used to treat “early chronic” spinal cord injuries — those three to 12 months old.

The treatment, developed by the UCI husband-wife research team of Brian Cummings and Aileen Anderson, also has reversed limb paralysis in laboratory rodents.

The Swiss trial is checking both safety and effectiveness. The first patient was injected in September.

Severely injured Miami gymnast walks out of hospital after treatment