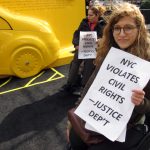 FLATIRON — Wearing yellow buttons stating “Separate is NOT equal,” a dozen advocates in wheelchairs rolled into the “Taxi of Tomorrow” exhibit near Madison Square Park Thursday to raise concerns about the lack of disability access in the city’s forthcoming fleet of cabs.

The “Roll-In” protest against the city’s Taxi and Limousine Commission exhibit was designed to pressure officials to reverse their position on accommodating disabled riders before New York City’s newly designed fleet of cabs hits the streets in 2013.

The TLC unveiled its new Nissan-designed NV200 taxi model, which it chose over Ford’s and Turkish automaker Karsan’s designs, and made it available for the public to view starting on Tuesday and ending on Saturday. Karsan’s proposed model was handicap accessible, but Nissan’s is not.

“They just picked the wrong one,” said Alexander Wood, 50, who has been wheelchair-bound since 1992. “It’s boneheaded.”

The TLC is currently locked in a legal battle with nonprofit law firm Disability Rights Advocates, which filed suit earlier this year on behalf of disabled individuals and advocacy groups, including the United Spinal Association, claiming the city is violating the Americans with Disabilities Act by not requiring every taxi to be handicap accessible. The Justice Department joined the fight last month, filing a statement of interest in ensuring that the city’s taxi fleet meets federal disability accessibility standards.

Of the roughly 13,000 cabs currently in New York’s fleet, only about 230 are wheelchair accessible, advocates said.

“The Justice Department getting involved is just a very rare event,” said Julia Pinover, a staff attorney for Disability Rights Advocates. “It’s a huge vote of confidence for our position.”

A spokesman for the TLC, Allan Fromberg, said in a statement that the agency is already exploring handicap-accessible options with Nissan.

“We recognize we need to do more to serve passengers who use wheelchairs and are already taking actions to do just that,” Fromberg said. “At our request, the Nissan NV200 ‘Taxi of Tomorrow’ will have an accessible version.”

In an interview earlier this week, Joe Castelli, a vice president at Nissan North America, said the NV200 could be modified to be more accessible but that the TLC had not yet asked for such a design.

But Fromberg confirmed that the TLC has, in fact, requested that Nissan make an accessible version of the NV200 available for sale “on demand.”

In addition, Fromberg said the TLC is in the process of creating a special dispatch system for wheelchair-accessible cabs through 311, and there is legislation awaiting the governor’s approval that would authorize the sale of more than 500 accessible medallions.

But for the wheelchair-bound protestors, it was all about having 100 percent accessibility.

“We’re going to be stuck with this design for a number of years,” said T.K. Small, 46, who has been in a wheelchair his entire life. “If we’re building it from the ground up, there’s no reason it shouldn’t be accessible.”

“It’s really difficult to find a cab. You kind of have to hunt for them,” said Defiebre, a graduate student at Hunter College. “The trains aren’t accessible either.”

Defiebre, who lives on the Upper East Side, never thought about issues of accessibility before her paralysis struck. She woke up one morning with neck pain. By the end of the day, she was paralyzed from the chest down — the result of a rare neurological disorder called transverse myelitis.

Now, she mostly relies on the bus to get around town. She waits for it in the rain, unable to carry an umbrella, and late at night, when it can take half an hour to arrive.

If all taxis were handicap accessible, “I would be able to take a cab,” she said. “That would be really nice.”

Erythropoietin Holds Promise In The Treatment Of Spinal Cord Injury