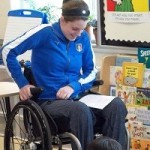 Hockey in her blood

Cameron grew up on Prince Edward Island, a tiny Canadian province with the highest rinks-per-capita ratio in the country. Family gatherings were full of hockey talk and Cameron willfully soaked it up, skating on all-male teams until ninth grade. Like her uncle, who played four years in the NHL and currently works as an assistant coach for the Ottawa Senators, the game came naturally to her.

After a standout collegiate career at Bowdoin College, Cameron chose to stay close to the sport she loves through coaching. Like many recent college graduates looking to break into the profession, she worked as a grad assistant, first at Castleton State and then at Mercyhurst, a premier Division I program in Erie, Pa.

A self-proclaimed workout nut, Cameron would often wake at 5:30 a.m. to hit the gym or grind out a P90X session.

Now, the aides who attend to Cameron come at 9 a.m. to lift her out of bed and into her wheelchair.

Cameron doesn’t remember the end of her bike ride in September 2010 because she was struck by a drunken driver, her body flung nearly 50 feet from the point of collision. Witnesses said the man behind the wheel, then 49-year-old Allen Peters, pulled over further down the road to check his car for damage before driving home, leaving Cameron lying on the shoulder with a fractured spinal cord.

After the accident, Cameron spent two weeks in a hospital in Erie. With family, friends, neurosurgeons, EMTs and trauma doctors shuffling in and out of her room, it was a bit of a blur.

But one checkup stood out more than the others.

“Someone came in and poked my leg and asked me if I could feel it, and I said, ‘No,'” Cameron said. “My sister immediately got up and left the room because she was upset. That’s one of the things I remember the most. Her being so upset, me feeling bad that she was upset. I don’t know, I guess I never really believed it.”

Cameron’s sister, Jennifer said: “I remember that happening and just feeling really sick and I was just shocked and couldn’t believe my eyes and it still doesn’t feel real but it was what happened.”

Cameron, 26, now lives in an assisted-living facility in Toronto, not far from the Lyndhurst Centre, a spinal-cord rehabilitation hospital where she does physiotherapy five days a week and works with an occupational therapist. She’s paralyzed from the chest down and has no control of her fingers or triceps.

But in true workout warrior fashion, Cameron sports wrist gear that connects to pulleys at the gym so she can do reps for her shoulders, deltoid and bicep muscles.

“You’re basically rebuilding your body again. You’re learning how to exist in your new body,” Cameron said. “I have a completely new body now. And I still don’t know a lot of things about it.”

A spinal cord injury’s impact can differ from person to person. And the struggle, Cameron said, is more than meets the eye.

“I may be in a chair, fine. I may not be able to walk, fine,” she said. “But Jesus, if I could stop having issues with my bladder, my bowel, the pain. People don’t understand that it’s about a lot more than just not being able to walk.”

The mental toll weighed heavily on Cameron when she attended the 2011 Women’s Frozen Four at Mercyhurst College. It was the first time she had returned to the area since the accident, and when she was wheeled into a private room overlooking the ice, the emotion was too much to handle.

“I was supposed to be there that year. … Everything set in; I saw what I was missing out on.”

Mercyhurst fell short of a Frozen Four appearance this past weekend, losing to defending national champion Wisconsin in the NCAA quarterfinals. But if anyone can put the idea of bouncing back from loss in perspective, it’s Cameron.

In the spring of 2011, the driver who struck Cameron, Peters, was arraigned and pleaded guilty to aggravated assault by vehicle while driving under the influence. He was sentenced to three years in prison. But since Peters had no registration or automobile insurance at the time of the accident, the Cameron family received nothing in the way of financial support.

Cameron admits she was upset with the verdict, but she has a different perspective than most.

That same mental toughness, paired with unwavering support from her family, helps Cameron get through exasperating rehab sessions. But taking things one day at a time has never been her thing. She likes looking toward the future. And though her initial plan hit a life-altering roadblock, she’s determined to find a way to finish her masters and work in the sport she loves.

In fact, Cameron recently tried a manual wheelchair that stands her up. Her sister’s Jennifer’s first thought? You can coach from this. You can be behind the bench standing.

“Every time I go [to visit her] I love going to physio with her because the stuff she can do already is just crazy,” Jennifer said. “And it’s hard to watch for sure but it’s also so inspiring to me. She can probably do anything someday.”

With plans to get a wheelchair bike soon, she’s also thought a lot about picking back up with her triathlon training.

“Just being able to get my body into as good of a place as it can be, that keeps me going,” Cameron said. “But a big thing is that, through all of this stuff … hearing how many people at home are thinking about me and have given money to my family. There are so many people that I don’t even know that help out. Those people, from what I’m told, all think that I inspire them and to me, if I inspire them, that’s what motivates me to keep working.”