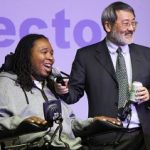 Eric LeGrand took the stage Wednesday in front of an audience of 70 people at the Busch Campus Center to present his outlook for the future, reflecting the event’s theme of “Don’t Stop Believing.”

Dr. Wise Young, his physical therapist and mentor, held the microphone for LeGrand as he recalled his injury during the Oct. 16, 2010 Scarlet Knights football game against Army’s Black Knights in the Meadowlands Stadium.

“When I first got hurt, I was laying on that field, and I felt like I knocked the wind out of myself,” LeGrand said. “Coach [Greg] Schiano came running up to me and said ‘you just got to keep praying, you just got to fight.’”

LeGrand said he saw his mother before he was taken off the field and assured her that he would be “all right.”

After seeing his mother, LeGrand said he “blacked out” and was unable to remember anything that happened until the following Wednesday, four days after his injury.

Young, director of the Unversity’s W.M. Keck Center for Collaborative Neuroscience said he first met LeGrand about six weeks after his injury.

“I want to make sure that Eric understands that we are here working for him,” Young said. “He’s my hero. He always was poised. He always had this confidence that he was able to do this.”

LeGrand said he began therapy with a lot of stretching and soon progressed to therapies, such as what he called “the standing frame” where LeGrand would be able to stand with assistance from a mechanical frame.

“I would get dizzy a lot and start feeling like I was going to pass out,” LeGrand said about his early attempts to stand.

LeGrand said he was able to fight through the pain, using his supporters as inspiration for his continued therapy.

“How can you give up?” LeGrand said. “I take it as a responsibility every day to get through therapy.”

LeGrand said his efforts paid off when he released a picture of himself standing on July 13, 2011 along with a tweet that read: “Standing tall, we can’t fall. Standing upright again #bELieve52 #TeamUSA.”

As for the future, LeGrand said he plans to be a broadcaster for ESPN.

“After I get my degree, I want to go into broadcasting,” LeGrand said. “I’m hoping to work with ESPN in the next two years.”

Dr. Young said he applauds LeGrand’s efforts both physically and in the classroom.

“Eric was taking classes again in January through Skype and doing his physical therapy at the same time,” Young said.

The event, sponsored by Student Society for Stem Cell Research, also featured musical performances by the student a cappella group Deep Treble, the University yo-yo club, and rapper ProfessirX, a victim of a spinal cord injury himself.

ProfessirX, also known as Richard Thomas, became paralyzed after he was shot in the neck and now devotes his time to rapping about the need for a cure.

The title of the first song he performed, “I Believe,” promoted the idea of not only using stem cell research for spinal cord injuries, but also other conditions that could benefit from stem cells.

“Everybody has got to believe there’s a chance for me to get out of this chair,” Thomas said in the song. “And if it ain’t me, it’s the kids of the future.”

LeGrand said with the help of some of his teammates, classes via Skype were just like being in attendance physically.

“My teammates would put the laptop right up front so once I put my headphones on, it was just like being there,” LeGrand said.

Since Young first arrived at the University 15 years ago, he has seen a rise in spinal cord injury research.

LeGrand said he is confident in Young and his staff, claiming that a cure is on its way.

“I know that this man right here will find a cure for all of us,” he said. “And then we’re going to party.”

All proceeds from the event’s admission went to the Central Jersey Spinal Cord Injury Association Inc., which is affiliated with LeGrand.

Their lives go on