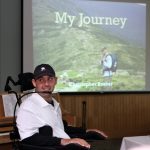 ANDOVER — After he suffered a spinal cord injury last July, the word “pride” took on a different meaning for Chris Boshar.

He uses it as an acronym for: Patience, respect, integrity, determination and empathy.

“No matter what, you never give in,” said Boshar, 25, who lost use of his arms and legs in a boating accident. “I want to walk. That’s something that keeps me motivated. It’s really all of you and your support that has made it so much easier.”

Boshar spoke about his efforts to overcome his paralysis to members of the Rotary Club of Lawrence yesterday at the Four Winds Restaurant at Greater Lawrence Technical School. His mother, Kathy Boshar Reynolds, is a long-time Rotarian and past president of the club. She is also director of endowment and planned giving for the Lawrence Boys & Girls Club.

During his presentation, Boshar thanked students in the school’s culinary arts department for donating $500 from their tip jar to his recovery fund.

“Kathy is a wonderful person who has a wonderful soul,” said Greater Lawrence senior Ninotchka Burgos. “We were so hurt when found out about her son. That was the least we could do. The appropriate thing to do is to give back and support someone in need.”

Attending the luncheon meeting were: Boshar’s mother; his cousin Matt Lawlor, who is his personal assistant; Boshar’s grandmother, Eileen Ivers of Methuen; his aunts, Kim Augusta of Londonderry and Pam Lawlor of Dracut; and long-time family friend Mary Doherty of Whitefield, N.H.

Boshar said after the initial shock of his injury, he had a choice to make.

“I could either stay in this wheelchair and there’s nothing I could do, or say, ‘I don’t really like this chair and I’m going to get out of it,”’ he said. “It (movement) was taken from me and I want it back.”

Boshar is working toward that goal.

He goes to a gym that specializes in spinal cord injuries and works with a private trainer who specializes in such injuries. He also participates in a therapeutic program at Boston Medical Center, as well as acupuncture and energy healing. He does daily therapy at a gym in his home.

“What I miss the most is the human touch, not being able to hug your mother and shake your friends’ hands,” Boshar said of his paralysis. “I was given this deck of cards and I’m going to play the best game I can.”

Before the accident, he was an avid outdoorsman who got up at 4 a.m. to go to the gym, climbed Mount Washington for his 25th birthday and enjoyed swimming, surfing and skiing.

Being confined to a wheelchair has not kept him from the active life.

Using special equipment, he went skiing at Cannon Mountain earlier this year and plans to sky dive later this month.

“Having a strong body and mind helps you drastically,” he said.

When asked by one of the students where he would walk first if he regains use of his legs, Boshar immediately said the gym.

Despite being paralyzed, Boshar keeps a positive attitude.

“I have absolutely no regrets,” he said. “My goals have changed, but I live each day to the fullest.”

He wants to start a foundation to help others with spinal cord injuries.

“I want to have a chance to make a difference in the world, educate the public and give back,” he said.

Students at Greater Lawrence Technical School were impressed by Boshar.

“He inspired me by his perseverance and if I can learn more, I can help more people,” said freshman Samantha Smerdon.

Boshar was born and raised in Chelmsford. He graduated from Chelmsford High in 2004 and received a bachelor of science degree in landscape architecture from the University of Massachusetts, Amherst in 2009.

He lives in North Andover with his mother, Kathy, and step-father, Steve. His father, Vin, step-mother, Kelly, and sister Rebecca, live in Chelmsford.

His family and friends plan a road race and walk to raise money for his recovery fund.

The most, and least, wheelchair accessible cities: a quadriplegic’s guide