LeGrand hopes to inspire others with new book 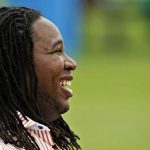 NEW BRUNSWICK — Eric LeGrand’s story of perseverence from a paralyzing spinal cord injury already has touched millions across the world, and now it will be detailed in book form.

HarperCollins Publishers on Tuesday announced it has signed a two-book deal with LeGrand, who shares his uplifting story of how he found purpose in pain and overcame setbacks with strength.

“Eric’s story has touched our hearts from the moment we heard about his amazingly upbeat attitude in the wake of his paralyzing injury on the football field,” said Lisa Sharkey, senior vice president and director of creative development for HarperCollins. “This pair of books, for adults and children alike, will serve to remind us what really matters in the world. Eric is a true hero, a beautiful person and a role model whose positive take on life astounds me every day. His book should be required reading for anyone who takes life for granted.”

“Believe: My Faith and the Tackle That Changed My Life’’ will be an adult memoir detailing the uplifting story of how LeGrand rebuilds his life, continues his college education, and pursues a career in sports broadcasting. “Believe: The Victorious Story of Eric LeGrand’’ is a young-readers edition co-authored by Mike Yorkey that features LeGrand’s belief in a grand plan.

Both books are slated to be published on Sept. 25.

“I really hope that everyone who reads these books will get inspired by my story — to see who I was before my injury, who I am now, and how I am still the same person,” LeGrand said, speaking from former teammate Kevin Malast’s comedy fundraiser benefiting the Spinal Cord Injury Project at Rutgers on Tuesday evening at the Stress Factory. “I hope ‘Believe’ will not only help to inspire people who have disabilities, but will resonate with anyone who has suffered in any way. If I can thrive despite my injury and never give up hope, maybe they can do the same thing. And I hope people just get inspired every day by being the best they can be.”

After suffering his paralyzing spinal cord injury while making a tackle in a game against Army on Oct. 16, 2010, LeGrand was told by doctors that he would likely be a quadriplegic and resigned to a ventilator. But the 21-year old Avenel resident defied the odds.

“A lot of amazing things have been happening,” said LeGrand, who can stand upright with the help of a metal frame. “I’m currently doing something called an EMG test where they hook up a bunch of pads to me that test out any muscle activity that is getting through me. When I’m doing it, they’re getting signals that can see that I’m doing it myself. They actually have videos at Kessler where I’m actually twitching my muscles, voluntary movement by myself.

“So I’m basically a case study, setting the pace for all the people at my level of injury. Basically there’s been so much progress that they couldn’t have imagined I would’ve gotten this far.”

Ever since his injury, LeGrand’s recovery has been well-documented both locally and nationally. In the past 20 months, the Rutgers University senior has conducted hundreds of interviews, addressed dozens of crowds at speaking engagements, and has been honored by countless groups inspired by his relentless spirit.

He has attended hundreds of games, including Super Bowl XLVI in Indianapolis, and recently accomplished the lifelong dream of signing an NFL contract when the Tampa Bay Buccaneers inked him to a symbolic deal.

“Honestly it has been the best year of my life,” LeGrand said. “I’ve been able to touch so many people in this past year than I ever had in my whole life. You know how it was — I was always playing football. It was a daily grind, getting ready for my routine. I didn’t have a problem with it. I was just hoping to get to the NFL.

“But now, after I’ve stopped playing football, I’ve gotten a chance to see life and discover how many opportunities are out there. It’s been amazing.”

Lady Tornado blowing away all challenges