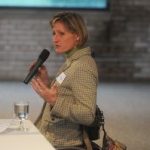 Holland — Before a spinal cord injury put her in a wheelchair 15 years ago, Jocelyn Dettloff didn’t give much thought to what it meant to “live independently.”

Today, however, she believes independence includes asking for help when it is needed.

Dettloff shared her story Tuesday evening of her dream to live on her own, after she returned from Namibia, where she’d sustained her injury while sledding down a sand dune.

“To live the way I wanted, I needed help,” she said. “Somebody has to change that light bulb or dust on top of the fridge (for me) … I’m four feet tall.”

Dettloff gave the keynote address at Disability Network/Lakeshore’s Ability Award reception at Bakker Lofts, where the theme of the evening was “The Real Meaning of Independence.”

Dettloff said society places an extraordinary amount of importance on living up to a narrow definition of independence, “as if there’s something wrong with needing help, wanting help or asking for help.”

“Are any of us truly independent? I think the answer is no,” she said. “We’re all dependent on others.”

Following Detloff’s address, the second annual Ability Award was given to Louise Shumaker, director of disability services for Hope College.

The Ability Award is given to a person who has played a significant role in building accessible and livable communities for people with disabilities.

Since 1987, Shumaker has assisted 500 students with disabilities to make a seamless transition to college life.

The five-member selection committee chose her among six other nominees, they said, because of her commitment to making campus an accessible and welcoming place for these students.

Disability Network/Lakeshore works to create communities where people with disabilities can participate, contribute and belong in Allegan and Ottawa counties.

Shumaker, who is legally blind, accepted her award with her golden retriever Franklin at her side. She thanked her family, especially her husband, Vern, for supporting her as she worked to complete her bachelor’s and master’s degrees.

“I can’t remember anytime I ever felt like he treated me as someone with a disability,” she said.

Disability Network/Lakeshore works to create communities where people with disabilities can participate, contribute and belong in Allegan and Ottawa counties.

Other nominees for this year’s Ability Award included Donna Bunce, Krista Mason and Evelyn Jellema, all of Holland; Becky Taylor of Zeeland; and Kelly Chapman and Geri McCaleb of Grand Haven.

By MEGAN SCHMIDT
The Holland Sentinel