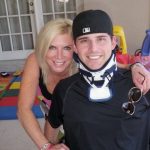 A beach accident prompts a Fort Lauderdale mother and son to create Walking With Anthony, a non-profit that raises money to help spinal cord injury victims.

Anthony Purcell’s voice grows strained when he speaks about that February 2010 day that changed his life. Back in Florida visiting cousins, he dove into the water off South Beach and crashed into a sandbar.

“I thought I was going to die,” he recalls.

He didn’t. A cousin rescued him, but he was left paralyzed, with a broken neck and two bruised vertebrae. He spent six weeks at Jackson Memorial Hospital’s intensive care unit, most of it in a medically induced coma. His lungs collapsed 17 times.

But he was lucky. He began intense rehabilitation as soon as he was able to, and that has made all the difference. That’s why Purcell, 24, and his mother, Micki, founded Walking with Anthony, a foundation to help others get the same kind of rehab that has helped Purcell progress to where he can stand with the help of a walker and bench press 190 pounds.

“When I first went into rehab,” he says, “I was like a noodle. I couldn’t even sit up.”

Walking with Anthony will host its first local fundraising gala Nov. 2 from 7 to 11 p.m. in Hangar 9 at Fort Lauderdale Executive Airport. During the event, called South Florida Movement for Change: It’s Time to Soar, the non-profit will present grants to Nick Williams and Chris Hickox, who were student-athletes at Cardinal Gibbons High School when Purcell was a varsity basketball player there. A 2008 car accident left Williams paralyzed from the waist down and a 2009 ATV accident left Hickox with a spinal cord injury.

The money donated to the young men will help them receive treatment at the Project Walk Spinal Cord Injury Recovery Center in Carlsbad, Calif., where Purcell rehabilitates.

“You need rehab immediately,” says Micki Purcell. “The faster, the better. I’ve seen that with my own son, and I can’t imagine someone else not being able to do that for their own.”

The fundraiser will also honor Dr. Allan Levi, Purcell’s surgeon and chief of neurospine service at Jackson Memorial. Former NFL player and University of Miami star Kevin Everett, who sustained a spinal cord injury in 2007 while playing for the Buffalo Bills, is serving as honorary chair with his wife, Wiande.

The Purcells decided to launch the foundation when they realized that, while millions of dollars were earmarked for spinal cord injury research, there was little financial help for patients to receive rehab. Most victims of the devastating injury have limited resources and, if they have insurance, are usually covered for about 20 days.

The money Walking with Anthony has raised so far, about $250,000, has gone to help three other people who need rehab.

About 12,000 people suffer a spinal cord injury each year, according to the National Spinal Cord Injury Database. More than 80 percent are men. And while the specialized health care and living expenses vary depending on the severity of the injury, the NSCID estimates that lifetime costs can reach millions of dollars.

Micki says her new purpose — to see her son walk again — has expanded. She wants to help as many spinal cord victims as the foundation can afford. “There is a hidden community that needs help,” Micki Purcell adds, “and we feel we can do our part to help.”

Anthony Purcell grew up in Fort Lauderdale, one of four kids. He moved out to California for college but returned for the 2010 Super Bowl weekend.. He felt comfortable in the local beaches and would’ve never guessed how shallow the waters can sometimes get.

But that horrendous day at the beach has given Purcell a new goal, as it did with his mother. Anthony speaks often to other spinal cord injury victims.

“It’s a bigger issue mentally than physically,” Purcell says. “You realize you’ll never be the person you thought you would be.”

Waiting for a miracle that could come soon