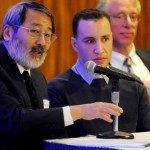 ALBANY — Millions of dollars in speeding-ticket fees meant for spinal cord research are instead being funneled into the state’s general fund.

A group of researchers, patients and advocates gathered at the state Capitol on Wednesday to highlight the budgetary diversion.

In 1998, under Gov. George Pataki, the state passed legislation which tacked a $5 surcharge to all moving violations to finance the Spinal Cord Injury Research Fund. This fee raises about $150 million annually, and up to $8.5 million of that was intended to assist researchers.

While the state continues to collect the surcharge, it is no longer being used for its intended purpose. Gov. David Paterson re-designated the money, and since 2010 the funds have been used to balance the state budget.

“All we’re asking is that the state of New York honor the legislation that is in place,” said retired State Police Sgt. Paul Richter, who was shot three times in 1973 during a traffic stop in Lake Placid. The incident paralyzed him from the neck down for six months.

Richter conceived the idea behind the legislation and worked to raise support and get it passed. He called the budgetary grab a “slap in the face” to those who could benefit from the program.

From 1998 through 2009, some $70 million was raised and spent on research. Investing this money in scientific advancement attracts biotech companies to the state, said supporters of paralysis research, and has inspired other states to create similar programs.

Terry O’Neill, who spent a year working with Richter to gain support for the bill, said the law reminded him of “restorative justice” initiatives, since it raised revenue from driving infractions, and many spinal cord injuries are suffered in car accidents.

“The state wouldn’t even be getting this money if it wasn’t for people who traveled to Albany and fought hard to get this surcharge on the books,” O’Neill said.

There is no proposal in this year’s budget to return the spinal injury funds, said Division of Budget spokesman Morris Peters. “The decision to phase out the program was made under a previous administration, and that’s all we have to say on it at this point,” Peters said.

Attendees at Wednesday’s event were encouraged to mail letters to Gov. Andrew Cuomo and Health Commissioner Dr. Nirav Shah to ask that they amend this year’s budget and return the funding before the Feb. 22 deadline.

The diverted funds were also addressed last year, said David Carmel, who was, ironically, appointed by Paterson during his term as state Senate minority leader to the Spinal Cord Injury Research Board.

“After nothing happened last year, we decided we needed to take this into our own hands,” said Carmel. “We want to make sure that if the people in power want to just sweep this under the rug, the public knows, and there’s some light shining on that decision.”

Off the cuff: How I fell in love with my wheelchair