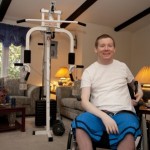 There are moments in time that can forever alter your life. Evan Cronhardt’s life changed its course on April 10, 2008 as he was driving across an intersection near his Severn home. His Jeep was struck by a vehicle that may have been racing on Quarterfield Road.

Evan was thrown from his Jeep, then crushed as it rolled over on him.

He recalls the suffocating weight of of his Jeep and the tracheotomy he endured as paramedics worked to save his life.

When he awoke in a Baltimore hospital, his spine was crushed and his pelvis was broken, paralyzing him from the neck down. He started a long series of operations as doctors tried to repair his multiple broken vertebrae.

Instead of retreating from his new world, Evan found a way forward. Before the accident he worked as a heating and air conditioning contractor, now as he marks the five-year anniversary of his accident his goal is more cerebral — law school.

“I am motivated because I want to be able to take care of myself. I am so driven and have never taken ‘no’ for an answer. I can either sit around and do nothing with myself or try a different cup of tea. You’ve got to do what you can with what you got,” Evan said.

Evan is seeking help from readers of the Maryland Gazette as he prepares for his next step. He is competing for a chance to win a modified van from the National Mobility Equipment Dealers Association. By voting daily for Evan on Facebook, the public can help him regain some of his independence.

Jeanie Cronhardt, Evan’s mom, who is a retired nurse, has supported him since the crash.

Evan works through two hours of physical therapy and one hour of occupational therapy three times a week. During one of these sessions in his home recently, Evan explained how he uses the various pieces of exercise equipment that pepper his living room.

At every step of the way, though, Jeanie and Evan have encountered obstacles. They have fought their insurance company for every piece of equipment they have received, she said.

Evan requires a nurse at all times because he suffers from autonomic dysreflexia, a life-threatening condition caused by overstimulation to the nervous system. Autonomic dysreflexia is common in people with spinal cord injuries. Anytime a pain stimulus occurs, no matter how minimal it would be to healthy individuals, it can trigger increased blood pressure. Left untreated it could cause a stroke.

To prevent this, Jeanie monitors her son at all times and is highly sensitive to his needs.

“For me it’s been hard because it’s been a whole lifestyle adjustment,” Jeanie said. “We get pretty isolated here.”

Jeanie wants her son to meet people and establish a social life outside their home. Caring for her son could be a lot easier if they had a vehicle at their disposal. She longs to take him to the park, watch a movies in the theater or visit family members.

The Anne Arundel County Department of Aging and Disabilities provided a mobility bus that Evan relied on for trips to shop for clothes, watching movies or to just get a haircut. Budget cuts eliminated the service except for transportation to and from his many doctors appointments.

“Having his own vehicle it would just allow him, and me actually, more freedom,” Jeanie said.

Both Evan and Jeanie have hope that he will walk again.

“I was paralyzed from the neck down when I first got injured,” Evan said. “When I was at Good Samaritan for a month I started to get my left biceps back. Ever since then it’s just been progressively increasing.”

Physical therapy sessions provided by the Kennedy Krieger Institute in Baltimore have contributed the most of the progress.

“They do a lot of therapy that is activity based, getting you to retrain your body. When I first started there I couldn’t sit up on my own or nothing. I was all over the place. Now I can sit up on the edge of a mat for like a half an hour unassisted. I just keep doing as much as I can, really,” Evan said.

Judith Stein, a senior physical therapist at the institute’s International Center for Spinal Cord Injuries, worked with Evan in 2009 while he was still dealing in the first stages of dealing with his injuries.

“The one thing about spinal cord injury is that there is no typical (case). Everybody has their own story of how they progressed past their injuries,” she said. “Evan is somebody who bounced back in the time since I met him, has returned back to school and is really working hard to get back into life and progress past this injury, which is a great thing.”

Every aspect of Evan’s life has been altered by this accident.

“It’s almost like starting over and re-learning all the skills again and finding a way that works. My job as a therapist is to kind of try to teach different way of doing things,” Stein said. “Each individual person has to come to their own way of doing things that is meaningful to them.”

Beyond helping to make the lives of spinal cord injury patients more convenient, being mobile and interacting with people is also healthy for their emotional well being.

“Having access to transportation it can be a huge part of your recovery because it gets you not just to therapy, not just to your doctors appointments. Being able to interact with your community and have the freedom to do things that you want to do on a daily basis, I think is huge in recovery in so many ways,” Stein said. “If I could give a van to every single one of my patients I probably would.”

In December, Evan will graduate with a bachelors degree in legal studies from the University of Maryland, University College. His GPA is a 3.86 and he is a member of the National Society of Collegiate Scholars, as well as the Alpha Sigma Lamda Tau Chapter at UMUC.

Evan plans to attend the University of Baltimore School of Law with a concentration in criminal and constitutional law.

To get there, he’s entered a National Mobility Awareness Month sponsored by the National Mobility Equipment Dealers Association. Three winners will get a free, modified Dodge Caravan. A typical vehicle that is capable of being driven by a quadriplegic can cost nearly $40,000, well out of Evan’s financial reach.

Through May 10, anyone can vote daily to help a local hero of their choice to win the mobility van. They can also attempt to win two daily votes by answering a trivia question correctly before voting.

“I’ve only been out of my house, and this is the honest truth, probably a dozen times in the past five years that wasn’t a doctors appointment. Like actual ‘me time.’ If I do get it I’ll be able to go to school. Because the state doesn’t transport to school,” Evan said.

His older brother lives in Delaware and has taken time off from work to drive Evan to college finals in previous years.

“And if I do win it, my first trip will be the Smithsonian, I’ll hit up the Air and Space museum,” Evan said. “I can only make my life better for myself, I’m the ruler of my own world. I still have my ups and downs but I just tell myself ‘work harder.’ ”

Surgery that restores hand and elbow function in quadriplegics is underused