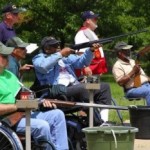 U.S. Navy veteran Jim Trombley, of Ballwin, clutched a firearm to his cheek, his eye riveted along the barrel. There was a long moment of anticipation, after which the command came. “Pull!”

A bright orange clay bird wheeled into the air, ahead of Trombley’s discerning gaze. A quick assessment of the clay’s trajectory signaled Trombley the precise moment to pull the trigger.

The shotgun’s report was immediately followed by the dramatic split of the clay bird, scattering orange splinters asunder.

Trombley was an Electronics Technician stationed aboard the fast attack sub U.S.S. Batfish, and deployed to the North Atlantic and the Mediterranean Sea in the mid 1980s. But the shots he took this day were not in aggression or defense during battle. They were for recreational trap at the safety of the Missouri Department of Conservation’s (MDC) Jay Henges Shooting Range in High Ridge.

Trombley, along with several other vets under the care of the Spinal Cord Injury Ward at Jefferson Barracks Hospital, was on a special outing June 3 organized by the High Ridge VFW Post.

MDC, the High Ridge VFW, the Spinal Cord Injury Ward and the Association for Paralyzed Veterans of America are partnering to provide a chance for vets with spinal injuries to get out and do some of the things they enjoy, like engaging in shooting sports.

“This has really gotten me interested in shooting again,” said Trombley. “I now have a new hobby.”

“All these guys have some kind of spinal injury, and many are in wheelchairs, so these vets don’t have a lot they get to do outside,” explained Jim Napoli, commander of the High Ridge VFW Post.

Napoli is also employed as a resource assistant at the shooting range, a position that helped him play a pivotal role in coordinating the effort.

A group of veterans comes to the range the first Monday of each month during the summer. They shoot trap on the shotgun field, then relocate to the rifle/pistol range where they finish the day shooting .22s. They also have the chance to shoot archery if they choose. A barbecue lunch is supplied and prepared by the VFW. Napoli’s post also furnishes all ammunition and additional staff to facilitate the event.

“The MDC is gracious enough to offer the fields, targets and waive the fees,” Napoli said.

The next outing at Henges for the vets will be Aug. 5. The last one in the program falls on Monday, Sept. 9 because of Labor Day.

According to Napoli, the experience at Henges is great therapy for the vets and enriches their quality of life.

“Things like this really help in making friends and team building,” he said.

“It just kind a makes my day,” Napoli said. “When you see them out there having a good time, it’s got to put a smile on your face. It’s a way to bring a little happiness to those guys and let them know they’re not forgotten.”

The Jay Henges Shooting Range and Outdoor Education Center, operated by the Missouri Department of Conservation, is located at 1100 Antire Road, just off I-44.

By DAN ZARLENGA
Dan Zarlenga is the media specialist for the Missouri Department of Conservation.

After spinal cord injury – getting muscles to respond