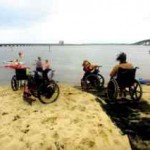 OCEAN CITY — For some of the swimmers, like Angel Mullin, they hadn’t been in the water since before their injuries. But Bruckner Chase, his wife and his sister-in-law weren’t about to let that stop them. Their swimming program for athletes with spinal cord injuries has helped several athletes like Mullin feel comfortable not only in the pool, but in the open water, too.

“I kind of had my life in a wheelchair,” Mullin said. “You get limited.

“I try to do a lot of things in my life. When stuff is not accessible, you’re not able to enjoy those things. This is like exploring the world in ways that I never really did even before my accident.”

Chase, 47, and his wife, Michelle Evans-Chase, 46, started the Ocean City Swim Club in 2008 after they moved to Ocean City from Santa Cruz, California in 2006. The swim club was for anyone that loved swimming, especially open water swimming.

Last year, Chase was approached by his sister-in-law, Becky McGill, a physical therapist who works with Bacharach Rehabilitation Hospital, to enter into a partnership with his Ocean City Swim Club to bring a unified ocean program for athletes with spinal cord injuries to Ocean City.

“She came to us because she said when many of her patients finished their prescribed therapy, there was not much for them on an ongoing basis,” Chase said.

Over the winter, McGill and Chase were able to get several Bacharach spinal injury patients into the water using at the Ocean City Aquatics and Fitness Center, which has a wheel chair lift into the water.

“We had tremendous success over the winter,” Chase said, adding that his athletes do a lot of prone paddling.

Prone paddling is covering a long distance in the bay or the ocean on paddleboards while laying down and using your arms and hands to propel yourself, he explained.

Chase said the spinal cord injury athletes integrated with the adult fitness program he was already running for the city.

“It kind of became a unified team concept, athletes with spinal cord injuries sharing the lane next to those without physical challenges,” Chase said.

In July, Chase brought the unified team to the bay in Beesleys Point for their first open water swim and paddle.

“We had had a regular group of five,” he said.

The athletes came from both Atlantic and Cape May counties, and one from Ocean County. The unified team has been going out almost every Sunday throughout the summer at high tide. The session lasts for an hour and a half, with the athletes paddling from 1-2 miles or swimming 100-200 yards.

Mullin, 33, of Egg Harbor Township, who suffered a spinal cord injury in a car accident 11 years ago that left her paralyzed from the chest down, joined the program in the spring.

“I used to swim years ago on a team before my injury,” she said. “I started swimming at the Ocean City Community Center in the late spring of this year.

“At first I was afraid because I had never swam on my own without some kind of floatation device.”

She said that because she trusted McGill, she felt more confident. Assistants Erin Curry and Abby Freitag, she said, were a great help, too.

“They did one-on-one coaching with me in the pool,” she said.

Before heading into the bay, Mullin first tried the paddleboard in the pool.

“I was really afraid to go in the open water. There’s no lane line, no wall for you to have that comfort zone,” she said. “Then once I did it, I was hooked.

“Bruckner, he prepares for everything. He is amazing,” Mullin said.

She said Chase knows the tides and know where the shallow areas are.

“He knows the water so well that you feel very safe with him,” she said.

On Sept. 21, Mullin completed a 3.3-mile paddle in the bay from Tennessee Avenue in Ocean City to the Longport bridge.

Mullin said that the program is great exercise for those with spinal cord injuries, and also helps to alleviate pressure on the spine.

“You’re stretching out your body. When you’re in a wheel chair you’re always in a forward positioning. All the motions you do are forward,” she said, adding that this opens up the chest and strengthens the back muscles. “Whatever muscles you can use, you’re going to get stronger.”

For the athletes, the program is free. Bacharach purchases punch passes for participants to the Ocean City Aquatics and Fitness Center. Volunteers or undergrads at Stockton looking at physical therapy as a career help out in the pool.

“The main focus was to create something ongoing and nothing overly volunteer-intensive,” Chase said of the unified team. “What we do is we get five athletes on paddleboards and maybe four or five volunteers.”

Upper Township has volunteered their EMS crews to help out with the open water sessions, he said.

“Upper Township has really kind of been stoked to have us there,” Chase said.

The biggest challenge to the program, Chase said, is transportation.

“We had a couple members of the Ocean City Swim Club recently donate a trailer and a new paddleboard, which is huge,” Chase said. “Now that we’ve got another board, a way to transport them, we’re really kind of stoked to put the word out.”

“We’re trying to get the word out, get more people involved with our program, improve fundraising,” Mullin said.

Chase said he wants to reach out to other rehabilitation hospitals in the region. The goal, he said, is to get more people with any sort of severe injury into the pool first and make sure that they’re safe.

“I have been coaching swimming for decades,” Chase said, adding that he is on a committee developing an open water swim program for Special Olympics International.

“Learning how to adapt whatever anyone brings to the water into something that will make them safe and have them experience the ocean the pool or the bay in a positive way is something that I’ve been doing for years,” he said.

Mullin said the experience for her has been “life changing.”

“It opened my mind to wonder what is possible,” she said. “I would never imagine myself doing that. Now, I’m like what’s next.”

Donations can be made to Bruckner Chase Ocean Positive at www.Brucknerchase.com, earmark for “local spinal program” or “unified team program.”

For more information on the unified team, see www.oceancityswimclub.org/Unified_Team.html