Young, disabled and stuck in a nursing home for the elderly 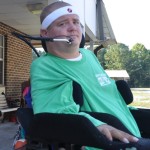 In one life, Boyd is a graduate student in counseling at the University of Montevallo, a small liberal-arts school about 30 minutes from where he lives. After class he sometimes sits on the porch of a coffee shop talking with a group of locals and college students.

In his other life, the 37-year-old Boyd is a resident of Chandler Health and Rehab, a nursing home in Alabaster, Ala. He drives the hallways in his sip-and-puff wheelchair, chatting with older residents like Thelma, who clutches a plastic baby doll to her chest.

Boyd is a tetraplegic. Because of an accident when he was 19, he cannot move his body below his collarbone. But mentally, he is healthy, with a sharp sense of humor and a love of trivia. For nearly five years, he has been fighting to leave the nursing home where he lives and move back to Montevallo, his hometown.

The problem is that Boyd cannot care for himself alone. He needs someone to feed him, to bathe him, to stretch his legs and arms in the mornings to prevent muscle atrophy. He lived at home for 10 years after his accident, and when his family members spoke about putting him in a nursing home, Boyd had two stipulations.

“One, that there are other people in there like me — i.e. younger, competent, in their right mind. And, two, that I approve of it before they put me in.”

They met neither requirement, Boyd said.

According to data from the Centers for Medicare and Medicaid, one out of seven residents in nursing homes is under 65. Since 2003, the population of younger residents has grown by 22 percent, and many of them want to go home. While states provide programs to finance care for elderly and disabled individuals at home, waiting lists are long — stretching to 3,500 in Alabama — and sometimes it can be difficult to meet the requirements of housing and care. Nursing homes, therefore, have become the default caregivers for young disabled individuals who need medical care and have few other options.

Gavin Ball, an administrator at a nursing home outside Birmingham, Ala., said residents under 40, including one woman who moved into the home at 18, occupy 10 of their 103 beds. People in the industry predict more young people will begin to enter nursing homes, specifically young veterans of the wars in Iraq and Afghanistan.

“That’s something that will be coming home in the next five years. There’s going to be a demand (for care),” Ball said. “Some of these guys and ladies have been through a lot physically and mentally. They’re going to have a lot of care on the way.”

In order to make younger residents feel more at home, Ball has purchased laptops and installed Wi-Fi; his staff reworked the menu to serve pizza and hamburgers to younger residents. While nursing home administrators say they are seeking ways to better accommodate this new population, the federal government is aggressively promoting funding for programs to move nursing home residents back home.

According to Patrick Hackney, who represents Boyd and is the senior staff attorney at the Alabama Disability Advocacy Program, the reason so many young people with physical and developmental disabilities in Alabama end up in nursing homes is that there is nowhere else to go.

“The primary reason that young people are in nursing homes is the lack of Medicaid funding for community services in Alabama,” Hackney said. “And once you are in a (nursing) home, it’s like the song ‘Hotel California’ by the Eagles — ‘You can check out anytime you like, but you can never leave.’”

Over the past few years, Alabama has slowly increased the allocation of Medicaid that allows for the elderly and disabled to live at home, but the scales are still heavily weighted toward institutional care. In 2011, Alabama Medicaid spent $901,897,515 on nursing-home care and just $113,771,731 on waivers that would allow the elderly and adults with physical disabilities to receive care at home.

A report by the Kaiser Family Foundation notes that in the U.S., per capita annual spending for home and community care was half that for nursing home care — $31,000 versus $62,000. In Alabama, a private room in a nursing home costs about $60,000 per year. Advocates for home-based care argue that living at home costs about half of that.

John Matson, director of communications for the Alabama Nursing Home Association, said this comparison is “apples to oranges,” since nursing-home bills include electricity, water, rent and food, as well as “24-hour skilled nursing care.” But Boyd and his lawyers argue that disabled people like him don’t need 24-hour care.

The 1999 Supreme Court decision in Olmstead v. L.C. ruled it was unconstitutional for people with mental and physical disabilities to be segregated in nursing homes. However, the question lingers, Where should they go?

Ten years later, the federal government lauded 2009 as the Year of Community Living and began aggressively promoting home- and community-based care through programs like Money Follows Person, which offers states federal money for each Medicaid recipient who transitions out of a nursing home. Roughly 25,000 disabled and elderly residents across the country have moved home through this initiative, and under the Affordable Care Act, federal funding for MFP initiatives will continue until 2016. But as of 2011, 17 states, including Alabama, had not fully implemented MFP programs, the Kaiser Family Foundation reported.

In Alabama, the MFP initiative is still in the planning stage. Alabama offers one program to move people like Boyd out of nursing homes, the Alabama Community Transfer (ACT) waiver, initiated in 2011. It is capped at 200 people, and only 19 people to date have received or are due to receive the waiver.

“To me, if in the last two years only 19 people have received services, that says something is not working,” Hackney said.

Robin Rawls, director of communications for Alabama Medicaid, said in an email, “While many people would like to move to the community, it is not safe for them to do so.” Rawls notes that individuals with disabilities need support and “are in nursing facilities only after families have done everything they can.”

Hackney argued this is the Catch-22 that prevents Boyd and others from getting out.

“So let’s take Paul as an example. In order to apply for the ACT waiver, he has to say, ‘These are the services I need, and these are the services I can have friends and family provide.’ Medicaid says you have to have outside support, and that’s usually family, and if they had that support, they wouldn’t be in a nursing home in the first place.”

In addition, neither Boyd nor Hackney can apply for a waiver; instead a social worker employed by the nursing home must start the application.

“I hope for two things,” Hackney said. “On an individual basis, I want to see Paul get out of a nursing home. And, second, that nobody under the age of 65 is in a nursing home. It’s especially no place for a young person. There is no peer interaction, no real community. It’s not that different from life in a hospital.”

Boyd sat on a concrete back porch at the nursing home on a recent evening, smoking with a small group of residents and staff. Lynese Hall, a certified nursing assistant in bright purple scrubs, was among them.

“I want you to know something about Paul,” Hall said, leaning out of his earshot. “I pray he gets out and gets a job, and then it will be a door opening to a lot more people getting out of here.”

Boyd believes he will eventually leave the nursing home. After his accident, as an ambulance drove him home along the tree-covered streets, Boyd recalled the wail of fire trucks and people cheering. The town of Montevallo had lined the streets to welcome him home.

“When we pulled into my driveway, there were 250 people on my front lawn,” Boyd said. “It is important to a long life to be wanted, and that’s how Montevallo makes me feel.”