Paying it Forward: Helping those with Spinal Injuries 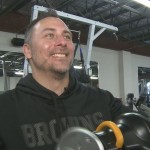 We love to bring you good news and all this month we are spotlighting individuals who “Pay It Forward” and make a difference here in Northeast Ohio.

” Quitting has never been an option for me. I’ve never been one to quit.”

Christopher Wynn is the opposite of a quitter. Chris grew up in Broadview Hts and was always very active in fitness and exercise. During the Gulf War he joined the United States Air Force and while off duty at the beach with his life friends his life would be changed forever –

” I was running from the beach into the ocean, just jumping up in the air doing front flips and I did a half flip – a flip and half – and landed on my head and the water wasn’t deep enough to break the impact.”

” I was lucky enough to float face up otherwise that would have been it. I would of drowned but I had to wait for the waves to wash me to shore before anyone could hear me yelling.”

Chris was paralyzed from the neck down but he didn’t quit. Over time he worked hard rehabbing and regained limited function of his arms.

In 2007 Chris spent one week at a facility in California that offered exercise programs geared toward spinal cord recovery. Knowing there was nothing like it in Northeast Ohio Chris brought the concept home. He and his wife Susan decided to open their own facility.

The Buckeye Wellness Center was born and with it, new hope and support for others that feel like quitting.

“To actually have a facility to be able to help people not only physically but mentally. We have things that are tailored for people with spinal cord injury. We have equipment that you can work out right from your wheelchair.”

21 years have passed since his injury and Chris never could of planned the difference he is making today.

“The majority of our clients – The difference between when they come in to where they are now – they have gained something below their level of injury – we have one individual who came in and is now walking on a treadmill.”

“For as depressed and as bad as things may seem – you don’t know what kind of impact you may have on somebody else’s life down the road.”

Chris is motivated by his clients – his friends – but mostly by his wife Susan and their 12 year old son Nathan.

“I’ve always wanted to be a role model for him and for my family and to let him know that quitting is not an option and no matter what happens in life – just don’t quit.”

For information on The Buckeye Wellness Center go to: www.buckeyewellnesscenter.com