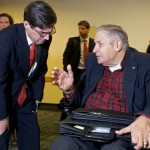 The group, New Yorkers to Cure Paralysis, had tried unsuccessfully since 2010 to restore about $8.5 million in annual state funding for the research, which they argued is required to be spent by state law. Roughly $2 million was restored last year, and Mr. Cuomo’s original 2014 budget earmarked a total of $4.9 million.

The paraplegics’ group spent the last several weeks lobbying state lawmakers personally, and won a crucial ally in Assembly Majority Leader Joseph Morelle. In its final budget, which was signed into law last week, New York state officials ultimately gave the program $7.9 million, which includes $900,000 that went unspent last year. No reason for the increase was given. “It’s just part of budget negotiations,” said Morris Peters, a spokesman for the New York State Division of Budget.

Medical researchers hailed the funding as a way to establish New York as a national leader in neurological research. The paraplegics’ group included several rehabilitation facilities, medical centers and foundations across the state.

“This funding also creates an opportunity to make important contributions to patient care and reduce health-care costs for multiple afflictions,” including stroke and Parkinson’s disease, said Mark Noble, professor of genetics, neurobiology and neurology at the University of Rochester Medical Center.

The lobbying group included retired New York state trooper Paul Richter, who was shot and paralyzed in 1973 during a traffic stop in Lake Placid, N.Y.; Wall Street financier David Carmel, who was paralyzed in a 1999 diving accident in Mexico; Nancy A. Lieberman, a Manhattan corporate attorney who was paralyzed in 2007 during a skiing accident in Colorado; and Paul Francis, a former New York state budget director who is not paralyzed but had his left arm amputated below the elbow after a bout of sepsis in 2012.

“With this funding, state leaders are fulfilling a commitment to scientists and doctors who moved to New York, in part, because of this program,” Mr. Carmel said. “It will also generate hundreds of high-paying jobs and encourage more life-science companies to move to our state.”

The program was started in 1998 and paid for through a surcharge on state traffic fines but it was cut by former Gov. David Paterson‘s administration in 2010 amid a $9.2 billion budget shortfall.