Quadriplegic savors what others take for granted 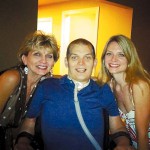 Making the most of every moment

It will be 10 years this November since Justin Cochran attempted to entertain his family with a back handspring on a golf course and almost died.

The young man, who was only 21 at the time, fell directly on his head on that golf course in Kentucky just after Thanksgiving 2004. He was rushed to Vanderbilt University Medical Center where he spent 12 days on a ventilator. He was paralyzed from the chest down after crushing the C1 and C2 vertebrae and needed a ventilator to breathe.

Today, Justin, 31, resides in Knoxville where he grew up. His mother, Shari Gorman resides with him and provides care. There hasn’t been any breakthroughs in research for people like Justin. He is still paralyzed and relies on the ventilator to keep him alive.

There will be a golf tournament right here in Blount County called HelpHopeLive for Justin, an event that will benefit the Southeast Spinal Cord Injury Fund. It will be held June 17 at Egwani Farms in Rockford and there’s still time to sign up.

Before Justin’s accident, he was an adventure seeker who had backpacked across Australia, Malaysia, Cambodia, Turkey and Thailand. He sky dived and hoped one day to become a pilot.

Since his accident, he has attended college, worked with others with spinal cord injuries and spoke before state congressional leaders concerning programs for the disabled. He volunteered with AmeriCorps and served as a counselor at Chattahoochee Tech.

It’s not about feeling sorry for yourself, Justin explained in an email. It’s about moving forward and making each day count.

“They say that a spinal cord injury will do one of two things to a person,” he wrote. “It will either destroy who they are or greatly enhance who they are. In my case, I believe it has made me stronger, more appreciative and more determined than ever to make the most of what life has to offer.”

Justin admits he struggles, but also tries to find the good in most situations. “Every day is a gift, and I am taking one day at a time.”

There have been stories in The Daily Times on Justin since his accident. His father is Mike Cochran, who grew up in Maryville and graduated from Maryville High. Mike’s parents, the late Bill and Shirley Cochran, were well-respected members of this community and Bill worked at ALCOA Inc. for many years.

Justin keeps up with what is going on with research and he holds onto hope there will be help one day for him and others like him. His injury is the highest level you can have when it comes to spinal cord injuries.

“I am paralyzed from the neck down and totally ventilator dependent,” he explained. “Less than 1 percent live to make it to the hospital and many don’t survive as long as I have.”

This strong-willed young man still has places he wants to see, things he’d like to do. One of them is to go to DisneyWorld again. He hasn’t been since he was very young. He said he would also love to see the ocean again.

There have been setbacks in the last 10 years. Justin suffered numerous infections and joint deterioration back in 2012. He almost died again, this time from pneumonia, ending up in the hospital for three weeks.

He said his heroes are his mother and his sister, Shannon, who have been there every step of the way. Family and his stubborn will to never give up have gotten him this far, he said.

Back in 2010, Justin wrote an article that appeared in The Daily Times. He said back then he wasn’t a compassionate, sympathetic or sensitive person. The accident, he said, shattered his self-image and left him a blank slate. He knew then, he wanted to help others, and that remains a goal of his.

For those of us fortunate to be able to go about life routinely, Justin said he hopes we never take what we have for granted.

“If they had to lie still for 24 hours and not be able to turn or move or even scratch their head or rub their eyes, they might get an idea of what I and others like me have to endure on a daily basis,” he said. “It I had one wish, it wouldn’t be for me. It would be for others to not take life for granted and make the most of every moment.”