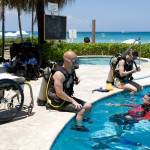 When Chris Kaag boarded a flight to the Cayman Islands for a scuba diving trip in May 2011, his legs stayed straight when he wanted them to bend and his feet flopped inward. He used two canes to move forward and cursed his feet dragging behind.

Put simply, maneuvering the plane’s narrow aisle was, as usual, “not a pretty sight,” says Kaag, a Marine Corps veteran and business owner who has a rare disorder that makes his lower body increasingly unresponsive to his mind’s commands. He uses the canes or a wheelchair to get around.

But when Kaag, 38, got on his return flight six days later, something was different. His legs weren’t so stubborn, his hips were more limber and, for the first time he can remember, he was able to bring his feet off the ground. “I even called the doctor . . . because I was floored,” he says.

Though the relief didn’t last long, Kaag’s experience offers support for a theory that scientists from Johns Hopkins University are working to prove: that scuba diving has unique therapeutic effects on the minds and bodies of people with spinal-cord-related paralysis.

In a pilot study that included Kaag and eight veterans who were paralyzed while in the military, the Hopkins research team compared physical and psychological measurements collected on the first day of the trip with readings taken after the group became scuba-certified, just five days later.

The results were dramatic: On average, the disabled veterans were 10 percent better at sensing light touch and 5 percent better at feeling pin pricks. Muscle tightness, or spasticity, decreased about 15 percent and motor functioning improved up to 17 percent. Among the five participants with post-traumatic stress disorder, their PTSD symptoms were alleviated by 80 percent, the researchers report. The researchers did not track how long these effects lasted, but the participants’ stories suggest the changes lingered anywhere from minutes to weeks.

“These are people who have had spinal cord injuries for an average of 15 years; there are no treatments for people who have spinal cord injury for 15 years,” says Adam Kaplin, the neuropsychiatrist who led the study with a Hopkins colleague, neurologist Daniel Becker. “The question became ‘Jeez, what the heck is going on?’ And to make a long story short, there were several possibilities.”

But teasing apart those possibilities isn’t easy. The study was small, involved countless variables and was intended only to explore whether the scuba theory was worth studying at all. The experience is illustrative of a broad scientific challenge: How do you go from a patient’s hunch to a scientist’s proof?

“The end-all, be-all isn’t just to give you an antidepressant or throw you in therapy for 10 years,” says Cody Unser, who founded the Cody Unser First Step Foundation, a driving force behind the pilot study. “It’s actually doing something that you never thought you could.”

Efforts to pursue follow-up studies are slow-moving: Federal funding for science dropped drastically during the sequestration last year. And the prospects may be even worse for a study that seems like no work and all play.

“People say, ‘Well, yeah, you took people to the Cayman Islands, so that must have had a therapeutic effect,’ ” says Kaplin, the chief psychiatric consultant to Johns Hopkins’s Multiple Sclerosis and Transverse Myelitis Centers. “Right now,” Becker adds, “I think people are still looking at us like we’re crazy.”

Unser is not one of those people. The 27-year-old, who is studying public health at George Washington University, first went scuba diving in 2000, a year after she was diagnosed with transverse myelitis, a neurological disorder similar to multiple sclerosis but much less common. She was not searching for any therapeutic benefit: She had grown up watching her parents and older brother dive, and she refused to let her condition stop her from learning to do the same. The experience saved her life, says Unser, whose father is famed race-car driver Al Unser Jr.

“Psychologically, I just felt more confident and independent and just like, ‘Okay, I can do this: I can live with a disability and be okay with it because I know it’s not going to define me,’ ” she says. But the physical changes were more unexpected. For weeks after she went diving, Unser — who has no feeling below her chest — could sense her bladder when she needed to urinate and feel the insides of her thighs when she put on her jeans. Her sleep was sounder, her legs didn’t spasm and she developed a “full-body energy,” she says. “Not just half.”

Unser began taking other people with paralysis, including veterans, on scuba trips and trainings through her foundation, which she launched soon after her diagnosis in 1999. Today, Unser and her mom, Shelley, run the organization, supporting its activities through a variety of sources, including connections in the racing industry, corporate sponsorships and other foundations. Kaplin, one of Unser’s doctors, found it intriguing that many of those divers reported sensations similar to the ones she had felt.

“Cody had been saying, ‘See? See? I’m not the only one. This is really going on. We really need a study,’ ” Kaplin remembers. “And I said, ‘Well, that’s great, Cody. Let me know when you’re going to go down there [to the Cayman Islands] and you have money to take people on one of these trips.’ ”

For nearly 10 years, Unser pressed her doctors to initiate a study, and Johns Hopkins endorsed the idea in early 2011. Within months, the foundation secured funding from Newman’s Own Foundation, Paralyzed Veterans of America, the Challenged Athletes Foundation and others.

“The exciting part of the story,” Kaplin says, “is that it opens up the possibility that listening to patients like Cody who are very observant about the effects they see and sense in their bodies can be extremely informative, and there may be, in fact, hope for people with spinal cord injuries that don’t depend on us having to get through all of the complexities of stem cells.”

Kaplin and Becker aren’t the first to study scuba diving’s effects on people with disabilities, but they’re among the few. In a 2007 pilot study, for example, German researchers reported reduced spasticity and improved quality of life among five people with paralysis after seven days of diving.

“I think the diving community in general, including myself, has known this since we first started donning tanks after Cousteau and others showed us the way,” says Julie Sanders, a training executive at the Professional Association of Diving Instructors Worldwide, which is based in Rancho Santo Margarita, Calif., and certified the veterans free of charge. “What is really spectacular now is that, scientifically, we’re seeing positive measured health results on those who psychologically and physically could really benefit from it.”

The researchers believe the results they found are due to more than just exercise, which people with paralysis ordinarily must perform for months before seeing even the slightest benefit, Becker says. The changes in the Cayman Islands happened in days.

And the sun and the sand can’t account for the 80 percent reduction in symptoms of PTSD, Kaplin says, because the disorder doesn’t go away when the environment changes. “If all you had to do was take people to the Cayman Islands [to alleviate PTSD symptoms], then the military would be flying all of the people with PTSD from the Iraq and Afghanistan war to these islands,” Kaplin says. “But it doesn’t help at all. They bring their PTSD [home] with them.”

Those high levels of serotonin may play into the veterans’ improved moods, too. The psychological benefits might also be explained in part by scuba divers’ controlled breathing and mastery of a fearful situation; both of these are used to cope with PTSD symptoms such as anxiety, Kaplin says.

But until researchers replicate the results of the pilot study on a large scale and control variables such as depth, location and type of paralysis, the connections are a stretch, says Peter Gorman, chief of the division of rehabilitation medicine at the University of Maryland Rehabilitation and Orthopaedic Institute.

“There’s no doubt about it that . . . it’s an extreme pleasure for a person with a spinal cord injury just simply to go in the water and be weightless and not worry about a chair; that environment is very liberating in both physical and psychological ways,” he says. “But then to make the jump that this actually had some neurological or psychological benefits is a big jump.”

No matter what — if anything — is behind the researchers’ results, however, Unser and others will continue to advocate for people with paralysis to do just that: Jump.

“You can’t put the ocean in a pill. I didn’t set out to look for the treatment to walk again: I found scuba diving as an activity and then, lo and behold, oh my gosh, I’m feeling something!” Unser says. “I’ll always be a diver, I’ll always approach people to go scuba diving. There’s just something about it that’s just totally unlike anything else.”

By Anna Medaris Miller
Miller is a health writer in Washington.

Regenerative Medicine Back on Fast Track