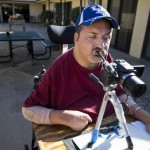 This one came to me as a story of a man who creates remarkable works of art with pen and camera despite being a quadriplegic with only minimal use of his right arm. It turned out to be far more than that.

As a student at Hardin County High School in Kentucky in the mid-1980s, Joe Hall knew a girl he “kind of liked.”

And Debi Martell liked Hall, kind of, too. He had that young Sylvester Stallone look, which was popular at the time.

Alas, they never shared much more than a nod in the hallways and around campus.

“I didn’t have the guts to tell her at the time,” he said.

“I always had a crush on him,” she said. “But I never spoke to him in school.”

Thus, during their senior year of 1984-85, Debi fell in love with someone else, a soldier. They married while she still was in school and left Kentucky after her graduation, eventually moving to Modesto. Joe, meanwhile, stayed in Kentucky to work on his father’s farm in the town of Vine Grove, growing tobacco and raising cattle, though he really wanted to become a body-and-fender man.

His dream vanished one evening in February 1986, when he went to a party.

“A guy slipped something into my drink and then stole my car with me in it,” he said. With Joe passed out in the passenger seat, the thug crashed the car. Joe became a quadriplegic at 19 years old.

The guy, he said, is now in prison on a child abuse conviction from an unrelated case. Joe, meanwhile, is imprisoned in a body that won’t ever work again. He barely can use his right arm, his left not at all. Nor his legs. There is no chance beyond an act of God he’ll ever regain use of his limbs.

Yet, Joe refuses to let his condition ruin his spirit. Rather than rue his circumstances, he taught himself to draw. He has an arm splint that holds his pen. Some pieces represent a series of dots – thousands upon thousands of them, like pixels in a high-def TV. Others are formed by making short lines, with no line longer than perhaps three-eighths of an inch. 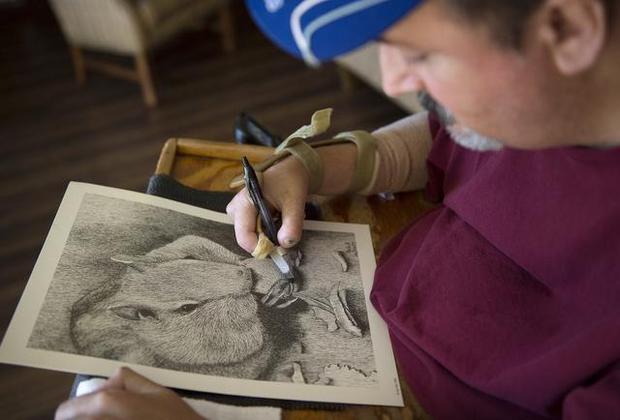 His drawings require patience, taking 40 hours or longer to complete. When he’s not drawing, he’ll spend hours behind a specially mounted camera. His mom designed and built the platform for him. He uses a stick mounted to the camera to point it in the right direction. He uses another stick he holds with his teeth to adjust focus as he zooms in on plants and insects.

Joe also navigates his computer using that same stick to move the mouse ball and to type on the keyboard below as he sends messages via Facebook.

And that is where his story comes, well, full circle. Still living in Kentucky in November 2010, he signed on one day to find a friend request from Debi Martell-Hodge – yes, one and the same Debi he once crushed on back in high school. Divorced after 20 years of marriage, she lives in Ceres and is a paraprofessional for the Stanislaus County Office of Education working with autistic children. She had come across Hall’s Facebook page among the “People You May Know” list generated through potential mutual friends.

“I didn’t think he’d remember me,” she said.

He did, though, and quickly accepted the invitation to be friends. They began e-chatting, which soon turned into four or five times a day. When they finally talked on the phone, the first call lasted three hours.

“There was never a break in the conversation,” Debi said. “It was like we’d been friends forever.”

The young man she had liked from a distance back in high school remained at a distance, on the other side of the country. She remembered hearing about his accident.

“I knew he had been paralyzed, but I didn’t know to what extent,” Debi said this week. “I thought he was paralyzed only from the waist down.”

Indeed, through their talks and texts, she found a person who wowed her on so many fronts – someone with an incredible will to live life beyond the constraints of his body.

“His whole attitude is inspirational to me,” she said. “He’s always so positive. Being 19 years old and being in a car accident like that. … He had his whole life in front of him.”

At 48 years old, Joe still does. Two years ago, he came to California to be with Debi. He lived in a convalescent home in Oakdale before moving to Evergreen Nursing and Rehabilitation Care Center in Modesto earlier this year.

They are engaged to be married, and she is in the process of remodeling her home in Ceres so that he soon can live there. Until then, she visits him at Evergreen every afternoon after work.

Joe spends his days doing what he loves, drawing and taking photos. He spent hours last week fixated on a praying mantis, taking shot after shot as a bee landed a leaf or two away.

Joe took other photos of the insect feasting on an aphid-covered plant.

“A smorgasbord,” he said.

Having sold more than 100 of his drawings, he probably could use an agent. The most one ever sold for was $75 – that, after more than 40 hours of work.

“When the other patients see him and see what he’s doing, he inspires them and makes them want to do more,” said Jason Visola, Evergreen’s activity director.

“When there’s something I want to accomplish,” Joe said, “I find a way to do it.”

That includes, through a strange quirk of fate, getting the girl he crushed on so many years ago. Debi thought they would be old acquaintances and Facebook friends and that would be that.

Murderball: This documentary is the wheel deal