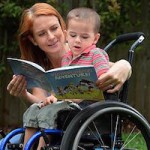 WHEN three-year-old Evander Conroy starts preschool in the New Year he will enter armed with a children’s storybook — all about him.

Evander, from Hunters Hill, is the subject of a new educational book about spinal cord injuries which was launched as part of Spinal Injury Awareness Week.

It tells the story of Evander sitting in a park with his mum having an ice cream when some superheroes from outer space arrive to take him on a journey of discovery about his unique situation.

Mum Clare said Evander is too young to have started asking questions about why he is in a wheelchair or to even comprehend it, but the book had already helped.

“I have been worried about broaching the subject and this answers all his questions and that of other children too,’’ she said. “It helps him understand why he’s not the same as other kids.’’

Evander was born with a tumour on his spine. At just three days old he started chemotherapy which continued for six months.

The treatment was successful in fighting the cancer but the damage to his spine was permanent.

Doctors told the Conroys their son would be a paraplegic but they have worked to challenge that diagnosis with two significant trips to the US and continual treatment.

“He can now sit up, roll over, commando crawl, he’s pretty independent,’’ Mrs Conroy said. “He has no spontaneous movements so he can’t think, I want to move my leg, but he has started to take some steps with a harness and walker.’’

In the book the aliens explain to Evander that his legs aren’t getting the message from his brain to make his legs move. Mrs Conroy has already seen the difference the story has made to her four-year-old Orson and seven-year-old Arabella.

“I heard the two boys talking and Orson said the words, spinal cord, in the right context,’’ she said. “It was amazing how much he had taken in.’’

She is confident the book will be a great source of pride and strength for Evander at preschool next year.

“It will be fantastic to take it and read it to his classmates,’’ Mrs Conroy said. “They will want to ask lots of questions and by being upfront they should understand. He thinks it’s very cool.’’

Medikidz Explain Spinal Cord Injuries is a joint project between The SpineCare Foundation and Medikidz. It is being promoted by Northcott.

The comic books are available free and can also be downloaded at northcott.com.au/spinecare