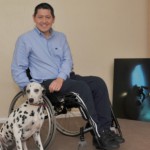 A Queensbury firefighter who was paralysed in a cycling accident is now using his love of scuba diving to help other patients with spinal injuries.

Pete Lau had travelled the world scuba diving and had a passion for the outdoors, but his life changed for ever when he suffered devastating injuries when he was knocked off his bike while cycling with friends in Wensleydale in April 2014.

The crash shattered vertebrae, and pushed bone through his spinal cord – injuries so severe he spent four weeks in a coma, required a tracheotomy to breathe, contracted double pneumonia and wasn’t able to speak for two months.

He remembers nothing of the accident but can remember the aftermath when his biking pals as well as a passing off-duty nurse and on-duty police officer came to his assistance.

“I remember coming round at the side of the car and trying to stand up and not being able to move my legs and this real odd sensation in my legs. It felt like my legs were hovering.

“I can remember not being able to breathe very well. I had collapsed both lungs. I thought I had winded myself.

“I knew it was bad. One of the things you learn in the fire service is how to do a casualty assessment and feel down the body for distortion or pain. I did that to myself and realised that I could not feel my hands touching myself.

“I said to one of my friends, a retired fire officer who was part of the group, ‘I have done something major to my spine.’

But after spending five months “rebuilding” himself at the regional spinal injuries centre at Pinderfields Hospital in Wakefield, he was able to leave hospital for his new home, a specially adapted bungalow in Baildon, Bradford, and has just spent Christmas with his family.

Mr Lau credits the training he has had during his 24 years with West Yorkshire Fire and Rescue service for the determination he has shown in his recovery.

He had risen to the rank of Assistant District Commander for Bradford and early in 2014 he had been deployed to southern England to command West Yorkshire Water Rescue resources that supported the national resilience widespread flood response.

He said: “Having a firefighter’s background made a difference. We all have a massive strength and discipline in us and we have a drive to do the best we can – it’s instilled into us from recruits stage.”

That training, and the love of scuba diving he had before the accident, has led to him setting up a snorkel club for people with spinal injuries in the hydrotherapy pool at the spinal injuries centre, with the help of colleagues from the WYFRS scuba section.

Mr Lau said: “Participating in activities such as scuba diving shows those suffering a spinal injury that they can still do amazing things despite now having a disability”.

Mr Lau’s colleagues have also helped him purchase a new wheelchair after they raised almost £4,000 on his behalf with a Cycle Endurance event at Todmorden Fire Station, collections at fire stations and a charity car wash. A race night at the force’s headquarters in Birkinshaw in November raised a further £2300.