‘An amazing example for all of us’ 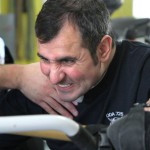 On Friday, Army Chief Warrant Officer 3 Romulo “Romy” Camargo will retire after 20 years of active duty. He’ll have his ceremony at the 7th Special Forces Group compound, surrounded by his family and friends and fellow Green Berets.

Most of the first 13 years of his career were spent in special operations, where he earned a reputation as a gung-ho soldier.

Despite being paralyzed by a sniper’s bullet in Afghanistan in 2008, Camargo has spent the last six years on active duty, counseling other wounded warriors.

“Considering the severity of his injuries, no one ever predicted he’d be able to breathe on his own, let alone talk to other veterans,” said Col. Robert Kirila, the deputy commander of the 7th SFG. “He’s been an amazing example for all of us.”

On Sept. 16, 2008, Camargo was on a humanitarian assistance mission during his third tour in Afghanistan when he and his team were ambushed by insurgents.

“I remember turning to my left to get a box of grenades,” he recalled. “As I did that, I felt like someone had punched me in the back of the neck.”

A sniper’s bullet had ripped through Camargo’s C3 vertebrae, located near the top of his spinal cord. As he lay limp on the ground, his team’s medic performed a tracheotomy, probably saving his life.

Three days later, he was at Walter Reed Medical Center in Washington, D.C., with his wife, Gaby, at his side. There the doctors told them that he was paralyzed from the shoulders down, and would never walk again.

Camargo spent the next 18 months as an inpatient at a Tampa veterans’ hospital, where he received intensive physical therapy.

One thing the hospital didn’t have to instill was a positive attitude.

“From my earliest days, the Army really drilled into my head to never quit,” Camargo said. “I just never gave up.”

Despite his catastrophic injuries, Camargo wasn’t ready to quit the Army, either.

Although he would have been eligible for a medical discharge and disability pay, Camargo was determined to remain on active duty. He found a role with the Special Operations Command Care Coalition, where he has worked to inspire and encourage fellow wounded warriors.

“I’ve overcome a lot of the issues that these guys are going through,” he said. “I try to show them that they don’t have to give up on life.”

Having spent the last few years working with wounded warriors, Camargo and Gaby have set a new goal: To build a rehabilitation center in Tampa that caters to people with spinal cord injuries, military and civilian alike.

The center will have a state-of-the-art gym with equipment especially for patients with spinal cord injuries, as well as services for patients’ family members.

‘Always been home to me’

Born in Washington, D.C., Camargo grew up near Crystal River, Fla. After joining the Army in 1995, he traveled around the world, spending 2001 to 2008 with the 7th Group’s 1st Battalion in Fort Bragg, N.C.

“The group has always been home to me,” he said. “Being a part of the group was a pinnacle of my career. They have been a great support to me, so I try to go up and visit with them as often as I can.”

According to Kirila, the 7th Group’s deputy commander, Camargo’s feelings for the group are mutual.

“He’s just one of those genuinely internally peaceful people who makes everyone around him feel better about themselves,” Kirila said, his voice catching with emotion. “When I first visited him in the hospital, he really believed that he was going to recover and go back on a team.”

“But what he’s doing now is just as important. He is able to teach and coach and mentor our young people through their personal challenges.”

When he visits with the group on Friday, Camargo will be dressed in his uniform, his medals gleaming on his chest. No wheelchair can confine his larger than life personality, or the spirit that has kept him going the past six years.

“I’m still here,” he said. “I’m still a husband, still a father, still a brother and a friend. Our Lord Jesus Christ gave me a second chance at life, and I’m going to make the most of it.”

For more info about Romy Camargo and the Stay in Step Foundation, visit www.stayinstep.org

Stemcells, building blocks of our bodies