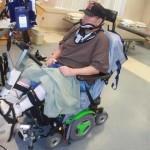 “It seemed like the fall lasted forever,” Michaelis said of falling down the basement stairs of his home on Jan. 25. “When I hit the bottom of the stairs, I knew I was in deep trouble, because I had no feeling.”

Michaelis’ wife, Ethel, heard him fall and immediately called 911. The Highland Fire Department was at their house on Sunflower Drive in about five minutes.

“We have the absolute best EMS services, whether it’s police fire or ambulance,” said Michaelis, a former city police chief.

Michaelis broke his neck and suffered two transverse process fractures to vertebrae in the thoracic part of his back during the fall.

“They (EMS) knew I was seriously hurt,” he said. “I knew I was hurt, too. I wouldn’t wish that pain on any person at any point in their life.”

There are five levels of spinal cord injuries, with level of five being worst. Michaelis’ surgeon diagnosed him with a level-four injury.

A month after his accident, Michaelis has more movement on the right side of his body than his left, but he does has movement in all four of his extremities. His fingertips are numb, but he has three fingers on his right hand that work. On his left hand, only his thumb works.

With an injury like his, Michaelis said the fight is both mental as well as physical.

“One day you are ready to fight and the next day you ask yourself, ‘Why should I?’” he said.

But Michaelis said he has his mind right for the fight ahead.

“This is where I belong,” he said. “The physical therapist I have is unbelievable. She not only helps me with my body, but also my mind. Without a positive attitude, you are not going to go anywhere. You have to fight this every moment of your life. If you do, it will increase your chances of success.”

Michaelis has occupational and physical therapy three hours a day.

“It’s a very grueling and hard process,” he said.

Each day, Michaelis tries to do something he couldn’t do the day before.

“It might be twitching a finger,” he said. “It might be a doing a little bit better than I did before in an exercise. But if I set my goals realistic, I stand a better chance of success.”

His therapists have to re-teach him everyday tasks, such as using fork and writing his name, which he can now do, although it takes a fair amount of concentration.

“It’s like when you are in the first grade,” he said.

His main goal — to walk again.

“Whatever comes back or doesn’t come back is dependent upon my mental outlook, my physical therapy and the unknown,” he said. “Each spinal cord injury is different. There is no way to gauge the progress of success. Just because I can move legs pretty well, doesn’t mean I can walk, because I can’t. I can’t support my own weight at this time.”

But he is determined.

“Every day, I will fight this fight and do the best I can,” he said.

Michaelis believes there is a pretty consistent theme with people who have spinal cord injuries and “a major mountain to overcome.”

“Recovery is not possible without prayer, and asking for God to help you every inch of the way,” Michaelis said. “Having close friends and hearing words of encouragement mean a lot today and are part of the healing process, because they give you motivation.”

For many years, Michaelis coached football and wrestling Highland High School. As a coach, he always preached to his players about how to face adversity and come out on top.

“When you compete, adversity will always be part of it, no matter if the opponent is bigger, stronger and faster than you,” he said.

Michaelis has long believed you can always win, if you have the drive and desire.

“I have to practice what I preached,” he said. “There is not a day that I don’t think about the high school kids that I coached, and see the miracles they made on the wrestling mat and football field. These kids rose above their talents to be victorious. Now, it’s time (for me) to stop the talking and do the walking.”

An outpouring of support

Michaelis said he has been humbled by the response of the community through the hundreds of get-well cards and telephone calls and visits he has received.

“I cannot repay the citizens for their show of support and being in their thoughts and prayers,” he said. “I will do everything in my power to recover from this devastating injury. I have so much to be thankful for, because I live in a community that is so caring, and it comes together all of the time when there is a need.”

If people want to visit and watch him in physical therapy, they are more than welcome.

“I know I have a much better attitude when people are around me. They give me hope for tomorrow,” said Michaelis, who celebrated his 64th birthday on Tuesday last week by eating chocolate ice cream with his brother, niece, nephew, one of his daughters, and his wife.

“I couldn’t make it without my wife,” he said. “She is loyal to me. She sleeps in the chair next to me every night to get me through this. I am very fortunate to have her in my life.”