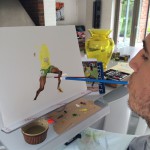 Nothing will ever come between Henry Fraser and his love for art.

Fraser, an England-based painter, was paralyzed after a traumatic accident six years ago.

While vacationing in Portugal with a few friends, Fraser dove off a dock into shallow waters and dislocated his neck.

According to Huffington Post, Fraser is now paralyzed from the shoulders down, but that won’t stop him from pursuing his true passion: art.

While sick back in January, the 23-year-old Hertfordshire resident became bored of lying in bed all day.

So, he decided to grab his iPad and draw a picture using only his mouth of Jonny Wilkinson, a British rugby legend.

After completing the drawing, Fraser tweeted the image, and Wilkinson replied, “That is phenomenal, Henry. I love it.”

From then on, Fraser crafted many drawings using paint, pencils and his mouth — finding a new way to exercise the artistic skills he learned in school prior to his accident.

Most of his drawings are sports-related, but there are a few movie references as well.

Check out some of his work on Instagram.com for a closer look!