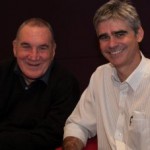 In round two of the 1975 VFL season, Neil Sachse was a promising South Australian Aussie Rules footballer playing his second match for Footscray.

He had just come from winning a premiership with SANFL’s North Adelaide and was ready to make his mark on the Victorian competition.

After winning a loose ball in the match against Fitzroy, Mr Sachse turned to run, and ducked into an attacking player.

Now, with help of ABC 7.30 reporter Mike Sexton, he is telling his story in a new book titled Playing On.

“Neil approached me about a year ago and said it might be a good idea to write a few things down, and it is an intriguing story,” Mr Sexton told 891 ABC Adelaide’s Mornings host Ian Henschke.

The book captures the stories and experiences of Mr Sachse after the accident, including his return to his old football club when he was unable to enter the building because wheelchair access ramps were not fitted.

It was something Mr Sachse accepted at the time, but has since worked hard to change.

“When you consider the 40 years since my accident … how things have changed, they have changed quite dramatically,” he said.

Realised injury was bad when unable to feel his boots

Mr Sachse knew the bump in the football game had caused more damage than originally expected when he was waiting to be transported to hospital.

He asked for his boots to be removed and when told they were already off, he knew his injury was more than superficial.

He accepted the injury without regret and showed the same determination to his new life that had made him one of the game’s most sought after players.

“I had two children – they were one and two – and a wife to look after, so there was a life to get on with,” Mr Sachse said.

“By blaming something, I couldn’t see what purpose there was in it … we made the best of what we had.”

The footage helped to raise money for Mr Sachse and his family, and has since been used to educate players and medics alike.

“My accident changed all of that, because it was televised at the time, so they could use that footage for training and how to handle people,” Mr Sachse said.

“It’s become a safety film, not only in football but for people in car accidents and general use.”

Mr Sachse said the moments and frustrations he felt following his injury were like coming to a river he could not cross.

It was also a metaphor for the difficulties of repairing spinal injuries.

“The biggest issue we will ever face is the [length] of some of the spinal cord injuries,” Mr Sachse said.

“If you have bruising of six inches, that’s a long way to go to bridge any sort of spinal cord injury, but the smaller ones can be easier to mend,” he said.

Through the Neil Sachse Foundation, he has funded a $1.5 million research project with Flinders University, and is currently attempting to raise $1 million for a Back to Basics spinal injury care program.

Mr Sachse said it was encouraging to see the changes which had taken place for people living with a disability since his accident.

“The technology that we have now can advance things so much quicker,” Mr Sachse said.

“Simple things like wheelchairs, they are a lot lighter now, so instead of having one that is 20 kilograms, you can have one about six kilograms.”

He also listed care programs, greater transportation options due to access cabs and general building accessibility as ways life which had improved for people in wheelchairs.

Levitra effective for ED due to spinal cord injury

The Simple Things: Giving Thanks For Life