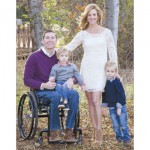 Above all else, Chris and Jennifer Bridgman are heartened.

In the five years since Chris suffered a spinal cord injury resulting in paralysis, the Los Altos couple has pursued a cure for the injury doctors said would be permanent.

A current research project gives them hope that Chris’s diagnosis could change.

The Bridgmans are partnering with the Christopher & Dana Reeve Foundation to support The Big Idea – a clinical study of paralyzed patients that has already yielded groundbreaking results.

“It’s life-changing. Nobody thought this was possible,” Jennifer said. “We are the most hopeful we’ve been in five years.”

The Big Idea relies on epidural stimulation – the application of a continuous electrical current that “reawakens” the nerve networks in the spinal cord.

In the therapy, doctors implant a small chip on a patient’s lower spinal cord, and the patient controls the chip – an epidural stimulator – with a handheld remote the size of a smartphone.

“It sends generalized electrical signals to the spinal cord that reminds the spinal cord of its potential,” said Susan Harkema, Ph.D., director of the Reeve Foundation NeuroRecovery Network.

After completing the first round of research on four patients with a 100 percent success rate, researchers intend to repeat the study with 36 more people, with the ultimate goal of reaching the masses.

“After years of funding scientific research, we have a breakthrough,” said Debbie Flynn, western regional director of the Reeve Foundation. “We think it will work for everybody.”

If so, it’ll impact a lot of lives. According to the 2015 National Spinal Cord Injury Database, approximately 276,000 Americans are living with spinal cord injuries and 12,500 more are affected every year. The leading cause is vehicle crashes (38 percent), followed by falls (30 percent), violence (14 percent) and sports and recreation activities (9 percent).

“I had (on) every piece of protective clothing possible,” Chris told the Town Crier five years ago. “It was a freak accident. I’ve crashed way worse and walked away.”

Chris and Jennifer – active young parents with a son born weeks after the accident – knew little about spinal cord injuries. The Reeve Foundation became their primary resource, and now, they’re contributing to The Big Idea.

“By partnering with the Reeve Foundation, our family is hoping to draw awareness to spinal cord injury and secure additional financial support for the next phase of The Big Idea,” Jennifer said.

The event came about when Chris’ mother, Los Altos real estate agent Kathy Bridgman, donated to the Reeve Foundation in her son’s honor. Flynn, the regional director who accepted the donation, herself has a son who is paralyzed.

“We became fast friends because we had this terrible thing in common,” Flynn said. “I left a successful career to fundraise for the Reeve Foundation, and I asked Kathy to help by putting on this event together.”

The fundraiser is part of a larger effort. To back the next phase of research, the Reeve Foundation seeks to raise $15 million. As of Monday, it has achieved 54 percent of its goal.

“It feels so good to do something,” Chris said of the event. “I’m incredibly fortunate. I’m married, we have children. I can continue doing my job from a wheelchair. I wanted to give back.”

Chris is ineligible to take part in the study because his paralysis is “incomplete,” meaning that he still experiences some feeling and movement below the point of injury in his left leg.

“We’re looking at the most difficult cases,” Flynn said of the research. “I think these next 36 patients will prove this amazing therapy once and for all.”

Eventually, the foundation hopes the therapy will be readily available to people with incomplete injuries like Chris – as well as those afflicted with paralysis because of stroke and Parkinson’s disease.

“This is a simple technology that’s in its infancy,” Chris said. “It has a ton of room to progress and improve.”

According to Chris, the worst aspect of paralysis isn’t being in a wheelchair – it’s the nerve pain.

“This is a very elusive field,” Jennifer added. “We’ve tried everything.”

While continuing to seek treatment, they have stayed true to who they are – positive and proactive.

“Once something like this happens, you just have to take it on,” Chris said. “You find your inner strength.”

Jennifer said this a milestone year. In addition to supporting The Big Idea, Chris was recently accepted for treatment at Craig Hospital, an acclaimed rehabilitation center in Colorado that specializes in spinal cord injury.

He’ll be admitted in October to train with an Ottobock C-Brace, a bionic exoskeleton that contains computers and sensors within the brace – affording him controlled knee flexion and real-time gait analysis.

“I have a leg brace, but it’s not a productive way to get around,” Chris said, later emphasizing that he and Jennifer are “so grateful for science.”

In the five years since he was injured, he said life has adjusted to a “new normal.”

“We’re very much a normal family,” Jennifer said. “The world here revolves around the kids – our needs fall down on the totem pole. I’m excited for him to have this time for recovery and to master this brace.”

The couple has two sons, with a third due in early December.

“Our boys’ favorite seat in the house is always Daddy’s lap,” Jennifer said. “Both boys learned to walk by holding onto his chair.”

Every year, the Bridgmans visit their sons’ classrooms to deliver a presentation titled “My Daddy’s Wheelchair.” They show videos of vacations, pictures of family activities – teaching the children that life moves beyond paralysis.

“It kind of felt like giving back,” Chris said. “This fundraiser is the next level of trying to help – to not just sit on the sidelines, but to actually feel like we’re contributing to the end result.”

The Bridgmans anticipate that the event will involve more than 100 Los Altos attendees, many who have demonstrated their support for years.

“Following the injury, we immediately felt a sense of community,” Jennifer said. “A lot of people wanted to help, and this is the first time we can say, ‘This is an awesome cause worth supporting.’”

For more information on The Big Idea, visit reevebigidea.org.