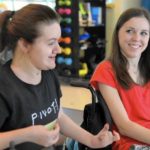 A rehabilitation gym at the Kennedy Krieger Institute was once a play space for Morgan Dunnigan and Grace Meek.

Despite the seriousness of their spinal cord injuries, the girls, then 6 and 7, squirted water at their doctors and visitors with syringes. They “raced” during balancing exercises. They even had Grace’s father’s toenails painted.

So it’s no wonder that returning to the International Center for Spinal Cord Injury at Kennedy Krieger Institute for a week 10 years later was a little like reuniting at summer camp.

“You pick up right where you left off,” said Morgan Dunnigan, now 16. “You see old friends. We talk about the games and pranks we played.”

Making the best of the situation has been a theme in the girls’ recoveries. And their friendship has been an important part of it, their doctors, therapists and family said.

“It’s a connection they have,” said Morgan’s mother, Laura Dunnigan. “There aren’t too many people who know what this is like.”

Spinal cord injuries are rare but are most common in men in their mid-30s, often from car accidents or physical stunts, experts say. In a gym filled with older boys, Morgan and Grace were little girls who wanted to play, says Rebecca Martin, occupational therapist and manager of clinical training at the spinal center.

“They formed a sweet friendship,” said Martin, who still remembers having them complete a hand exercise, putting their fingers in whipped cream to make it more fun.

“We all ended up smelling like spoiled milk for the rest of the day,” Martin said.

Grace Meek was 7 when she had a stroke in her cervical spinal cord. She was at school at the time, with a sudden onset of pain and paralysis. The causes of spinal strokes are unknown.

“We still don’t know why it happened,” said her mother, Kim Meek.

Now 17 and a recent high school graduate, she is about to start college in Texas, where her family is moving from West Virginia. A quadriplegic, she uses a power wheelchair full time and has limited arm function.

Morgan Dunnigan was 6 when a tumor (pilocytic astrocytoma) was found on her spine. Her symptoms started with an itching sensation and torticollis (twisted neck), then progressed to full paralysis.

Now she is about to begin her senior year of high school in Jackson, Miss. She can walk sometimes, but uses a manually powered wheelchair at school.

Both girls spent several months at Kennedy Krieger’s International Center for Spinal Cord Injury in early 2006 as part of the activity-based restorative therapy program. The goal is to have patients with spinal cord injuries perform exercises and motor tasks that help nervous system cells “remember” how to move and prompt new cells to regenerate.

Most of the center’s patients with paralysis recover some degree of sensation, movement and independence, and recovery can begin or continue months and years after the injury.

Activity-based restorative therapies — such as functional electrical stimulation and aquatic therapy — also help prevent some of the complications associated with paralysis, such as osteoporosis, skin breakdown, infection and cardiovascular decline, according to experts.

“It just fosters a positive, nurturing, healing environment, when you have fun and play,” said Dr. Cristina Sadowsky, clinical director at the spinal center. “We remember [Grace and Morgan] with a great warmth. They were very mischievous.”

The girls and their families were excited when they discovered how close in age they were. But, Laura Dunnigan said, “We were also torn, because the reality is that another family is going what you’re going through.”

The families still laugh about Grace’s father’s toenail painting which turned out to be a very effective distraction when it came time for Grace to begin to breathe without using a ventilator.

The girls could bond over “Hannah Montana.” And, Laura Dunnigan said, “they were able to talk about some of the medical stuff they were going through.”

They can also relate to issues they face now. “Access is an issue — a ramp that goes to stairs,” said Morgan. “A couple of stairs is still stairs.”

Neither girl lives in a place where therapy is available for the type of injuries they have. “They don’t know what to do with me anywhere else,” said Grace. “That’s why I love coming here.”

The girls undergo comprehensive assessments of their muscle function, sensation and functional skills. During their stay earlier this month, Grace also received injections of a medication that she had never tried before.

Each day for a week, both girls worked four to six hours in physical therapy, occupational therapy and aquatic therapy. Kennedy Krieger staff also tailored therapy programs that the girls can do at home.

“We’re always working on two paths — to continue to help with their physical recovery and the other part, to help them be as independent as they can,” said Janet Dean, a certified registered nurse practitioner at the spinal center.

Even more important, the girls said they were receiving inspiration. “People here are pushing you,” said Grace, who has a new wheelchair that adjusts in height, making it possible for her to stand for transfers and sit at higher tables. “At home, it’s easier to get distracted.”

Because she lived relatively close — in West Virginia — Grace has returned to Kennedy Krieger annually for treatment. During her freshman year in high school, she came even more often.

“This is a second home,” she said. “There’s a trust level here.”

In addition to phone calls, the Dunnigan and Meek families have visited each other’s homes several times over the years. The girls attended a summer camp twice together. And their parents do their best to schedule their Kennedy Krieger visits at the same time.

The girls and their mothers stay at the Ronald McDonald House, while their dads are at home with their siblings. While Grace and Morgan are in the gym, the mothers have a chance to catch up.

“She can relate,” Dunnigan says of Meek. “It’s terrible when any kid gets strep throat, but when our kids get it, it becomes this domino. It’s dangerous.” (Spinal injuries inhibit the body’s ability to regulate a fever.)

The return to Kennedy Krieger also gives them a chance to reflect, the mothers said. “We can joke about the time we spent here as inpatients,” said Dunnigan.

At the time, though, when they were sleeping in a chair at the bedside of their little girls, it was hard, Dunnigan and Meek said.

“I remember … wondering, ‘What will 10 years look like?'” Dunnigan said.

It would’ve been difficult to imagine that they’d be back, taking the girls out to Fells Point for dinner, cracking jokes about the romantic potential of a young man passing by in a wheelchair.