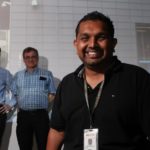 MOST doctors study for years so they can help others but for Southport’s Dinesh Palipana, it is much more ­personal.

A month out from his graduation ceremony at Griffith University, the 32-year-old doesn’t just want to help others, he also wants to help himself.

“I’ve had a vested interest and a passion to cure spinal cord injury and cure myself in the process,” he said.

Part-way through his medical degree in 2010, Mr Palipana was driving home to the Gold Coast from visiting his parents in Brisbane when his car aquaplaned on a wet road and overturned near the Gateway Bridge.

“My car rolled and when it stopped, I just couldn’t move,” he said. “I became paralysed from the chest down.”

It took five years for him to get his life back on track – returning to university last year.

Next month Mr Palipana will become only the second person in Australia with quadriplegia to graduate as a medical doctor – the first in the country with a spinal cord injury.

On his return from rehabilitation he took a keen interest in treating spinal cord injuries and now has been named a key researcher in a Griffith University collaboration with Harvard University to research and conduct clinical trials on non-invasive treatments for the condition.

While studying, Mr Palipana spent time in the US at Harvard where he was mentored by Dr Yang D. Teng, a world leader in the study of spinal cord injury treatments.

Professor Harry McConnell is to spearhead new spinal cord research at Griffith University’s Menzies Health Institute of Queensland which, he said, centred on the concept of “neuroplasticity”.

“It’s a different approach than the stem cell approach,” he said. “This focuses on enhancing the power of neuroplasticity – that is the ability of the brain and the spinal cord to essentially heal themselves.”

Professor McConnell said he and his staff hoped to discover what combination of therapies worked most efficiently and what kinds of spinal cord injuries were best treated by the new processes.

“We’re looking at bringing this neuroplasticity research to a clinical trial stage,” he said.

Fighter aims to knock out paralysis