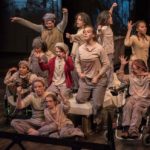 The Colorado-based Phamaly Theatre Company has burnished its artistic reputation by selecting shows that resonate — intellectually and emotionally — with the many facets of disability. Cast entirely with performers who live with disabilities, the shows engage questions of possibility and perseverance as well as marginalization and discrimination.

Just as vitally, they take theater seriously, they entertain. Although it has expanded its yearly offerings, the company continues to produce a winter play and a summer musical. Even a musical as non-taxing and agreeable as its current one, “Annie,” offers fresh and telling insights.

“Annie” runs through Aug. 6 at the Stage Theatre at the Denver Performing Arts Complex.

By happenstance, I ran into three of the show’s young performers in the company of family at a Whole Foods store a few hours after Sunday’s matinee. The trio were sweet and not particularly interested in hearing their praises sung (though Maria Ciobanu, who plays the red-haired orphan, did have a flicker of a smile before dipping back into shy modesty).

Chalk up the kids’ nonchalance to the immunity that children sometime have to adult flattery. Or, perhaps, it reflects the fact that Cioabanu and twins Carl and Jerry Krim (who play wild-haired waifs Freddy and Teddy) have been diagnosed with attention deficit disorder and central auditory processing disorder.

How do I know this? Because a Phamaly program book always mentions the particular disability (or disabilities) of its cast members. Physical, cognitive, intellectual and/or emotional, the disabilities can cover a broad swatch: from autism to cerebral palsy, blindness to spinal cord injury, obsessive compulsive disorder to traumatic brain injury.

This chance encounter underscored what I had been mulling since seeing Phamaly’s production of the 1977 Tony winner about a spunky orphan who wins the heart of a New York City magnate during the Great Depression. Lyricist Martin Charnin based the musical on Harold Gray’s long-running comic strip “Little Orphan Annie.” Phamaly artistic director Regan Linton has tag-teamed with the theater company’s one-time honcho, Steve Wilson, to deliver a show that is effervescent, winning and charmingly imperfect.

I’ve seen perhaps a dozen Phamaly shows. And while some of the main attractions have featured kids — the exceptional “Fiddler on the Roof” comes to mind — none has seemed so focused on children, and by beautiful extension afforded its young performers such scene-chewing, hammy, tender opportunities.

This was immediately apparent in the early, rousing “It’s a Hard Knock Life,” sung by the orphans who populate Miss Hannigan’s glum New York City dormitory. Audience members without disabilities might imagine that this tune would strike an earnest note. Instead, as the orphans — some of them in wheelchairs — zip and dance about the stage, there’s nothing covertly plaintive. This “Hard Knock Life” isn’t winking. Nor is it a sentimental celebration of gumption. It’s merely amusingly joyous and in keeping with the musical’s dogged theme of optimism.

A moment of a similar yet different embrace takes place during the number that finds Oliver “Daddy” Warbucks, his assistant Grace and the ensemble singing the praises of “NYC.” As a hopeful “Star to Be,” Megan McGuire rises up from a door in the stage floor, her arms — one ending below the elbow — outstretched in the grand gesture of a natural-born showstopper. It’s a sight that exemplifies the hard-to-articulate fluidity between “is and isn’t different” that varied identities challenge us all to deal with.

Vivacious moments don’t bleach out the musical’s darker motifs. Annie’s visit to a homeless encampment and the subsequent number sung by its Hooverville denizens, “We’d Like to Thank You, Herbert Hoover,” address economic disparity with appealing — dare we venture, renewed — vigor.

In 2015, Phamaly took on the ominous and sensual themes of the Weimar Era-set “Cabaret.” That stretch appears to have emboldened the company to tease more freely the themes of bodies and eros. Miss Hannigan has always been a tippling, coarse soul, but Phamaly regular Ashley Kelashian invests her bawdy character with carnal as well as fiscal hankerings. (Costume designer Nicole Harrison’s brazen feather boas don’t hurt.) Hannigan’s recently paroled brother Rooster (Stephen Hahn) — who arrives on crutches, his gal Lily (Lyndsay Palmer) at his side — is not above a libidinous smirk and an ogle, either.

Leonard Barrett Jr. and Jenna Bainbridge, two of the local theater scene’s strongest musical performers, bring rich voices to Annie’s wealthy patron and his luminous, whipsmart assistant. But it’s the kids who are likely to stay with you.

Ciobanu’s Annie isn’t a belter. “Tomorrow” is more a touching ballad than bold anthem. But that’s just fine. This Annie is perfectly human. As for Sandy — played by Daisy, a black lab — well, the pup earns its place in the Phamaly family … and our hearts.

AM General plans to begin making vehicle in 2010