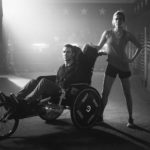 In June 2016, Matt Wetherbee was left paralyzed after going head first into a wall during a pick-up basketball game. Severely damaging his spinal cord, Wetherbee was transported to the hospital where he spent two months facing a number of complications, and ultimately relocating to a rehabilitation center.

Since that time, Wetherbee has continued to work on his mobility at the Journey Forward rehab facility in Massachusetts four times a week. Last year, his longtime girlfriend Kaitlyn Kiely decided to run the Boston Marathon in his honor as a way to encourage him that his rehabilitation was a marathon and not a sprint; that his daily progress would one day pay off.

This year, the couple decided to compete in the marathon as a duo in the Athletes With Disabilities division. Having missed the deadline to be considered in the division, the pair teamed up with HOTSHOT and its team of “Unfinishers” to raise awareness and funds for Journey Forward. HOTSHOT launched its Unfinishers campaign in March to support athletes who have unfinished business due to muscle cramping or injuries and helps them complete their goals.

Kiley began the 26.2 official Boston route at 9 a.m., pushing Wetherbee in a racing chair the entire way. “Kaitlyn and Matt are an inspiration to all of us, completing their ‘Unfinished Business’ despite the many hurdles they have had to overcome,” said local pro Ray Bourque. The couple crossed the Finish Line at Copley Square, and were presented with a $25,000 check from HOTSHOT to Journey Forward during the post-race celebration.