Claire Lomas TT challenge: ‘I can only feel the handle bars’ 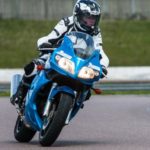 The idea of racing around the Isle of Man’s world-famous TT course is terrifying for most us.

Yet Claire Lomas, who is paralysed from the chest down, hopes to do just that while only using her hands to control her motorbike.

“The bike has hand-controlled gears, Velcro on my knees to stop them flapping, and toe clips to stop my feet sliding,” she said.

“I’ll have someone to launch me and some poor person has to trust me as I ride towards them for them to catch me!”

In 2007, the 38-year-old from Leicestershire suffered broken ribs, a punctured lung, a broken neck, a broken back, and the spinal cord injury which left her paralysed.

“I did have dark thoughts,” she said, “because my life had been turned upside down and there was so much I would never do again.

“But I eventually realised that I had to stop thinking about what I couldn’t do, and start focussing on what I could.

“I took one day at a time and made the most of every opportunity. It was slow at first but life eventually became interesting again.”

During the last 11 years, Lomas has written a book, got married, had two children, completed the London marathon, hand-cycled from Nottingham to London, and been awarded an MBE.

Along the way she has also raised more than £650,000 for spinal research.

Her latest obsession is motorcycling. And rather than being content with pootling about the country lanes of the Isle of Man, she’s now determined to fly around the TT circuit.

Having started motorcycling with The Bike Experience charity in 2015, she resumed her training at Rockingham Speedway in April 2017.

Last July she passed her Auto-Cycle Union (ACU) test and now intends to complete the Manx challenge around the 38 mile (60 km) course on an adapted bike.

“My initial thought was ‘this is crazy’,” she said. “The only part of the bike I can feel is the handlebars.

“I don’t have time for the dark thoughts anymore.

“Life is very different and I have no reason to have down days, I just get on with it.”

She will attempt her challenge during the Manx Grand Prix in August.

Blocking a protein could be key to treating spinal cord injuries