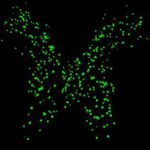 Spinal cord injury (SCI) commonly results in paralysis from the injury site down, even when the spinal cord hasn’t been severed completely. The remaining nerve cells that might bridge the gap appear to switch off, resulting in total loss of muscle control and sensation. Scientists at Boston Children’s Hospital have now identified a small molecule drug that effectively reactivates the signaling pathways between these remaining nerve cells and the brain, restoring walking ability in mice that had been paralyzed by SCI.

Led by Zhigang He, Ph.D., director of the Boston Children’s Hospital Viral Core and professor of neurology and ophthalmology, Harvard Medical School, the researchers found that the drug acts by boosting levels of the chloride transporter KCC2 in spinal cord inhibitory interneurons around the injury site, effectively restoring their ability to respond to brain signals. Using a gene therapy technique that prompts direct expression of KCC2 in these inhibitory neurons resulted in similar, and sometimes even better functional improvements in treated SCI animals.

“For this fairly severe type of spinal cord injury, this is most significant functional recovery we know of,” says Dr. He. “We saw 80% of mice treated with this compound recover their stepping ability.” The Children’s Hospital team and colleagues at Brigham and Women’s Hosptial, Boston, and the Co-innovation Center of Neuroregeneration at Nantong University, China, reported their findings in Cell, in a paper titled, “Reactivation of dormant relay pathways in injured spinal cord by KCC2 manipulation.”

About 50% of patients with incomplete spinal cord injuries suffer from total loss of muscle control and sensation below the injury site, the authors write. What isn’t understood, is why the remaining neurons can’t process the brain signals that would allow some degree of voluntary movement. “… it is largely unknown why this spared spinal circuitry is dysfunctional after SCI and how it can best be reactivated,” according to the authors.

Research has previously found that voluntary movement of hindlimbs, for example, requires commands from the brain to pass down descending axons into the lumbar locomotor center. This signaling appears to be dormant in nerve cells that remain following SCI. One hypothesis as to why suggests that the firing and conduction properties of neurons with descending axons becomes compromised. It’s also possible that “local spinal cord circuits could be rendered nonfunctional by injury, such that they may no longer be able to relay or integrate the spared descending inputs,” the authors suggest.

While much current research aimed at restoring mobility after spinal cord injury is focused on triggering the growth of new nerve cells, recent studies have shown that combining epidural electrical stimulation with rehabilitative training can “remarkably” allow some chronically paralyzed SCI patients to regain a degree of voluntary movement. It’s possible that the electrical stimulation somehow reactivates the dormant spinal circuitry, reopening communication pathways between the spinal cord and the brain, the authors suggest.

This concept that it may be possible to reawaken dormant signaling prompted the researchers to evaluate a number of small molecule compounds that are known to target key regulators of neuronal excitability, and which can cross the blood-brain barrier (BBB), in experimental mice with surgically induced SCI. “Epidural stimulation seems to affect the excitability of neurons,” says Dr. He. “However, in these studies, when you turn off the stimulation, the effect is gone. We tried to come up with a pharmacologic approach to mimic the stimulation and better understand how it works.”

Candidate drugs were chosen based on their ability to modulate neuronal excitability when administered systemically. These included baclofen, a GABA receptor agonist; bumetanide, an inhibitor of the Na+/2Cl–/K+ co-transporter (NKCC); CLP290, an agonist of the neuron-specific K+-Cl– co-transporter (KCC2), also called SLC12A5; L838,417, a GABAA-positive allosteric modulator; CP101606, an NMDA receptor antagonist; 8-OHDPAT, a 5HT1A/7 agonist; and quipazine, a 5HT2A/C agonist. Each compound was given to a group of 10 paralyzed SCI mice via intraperitoneal injection, starting a week after injury, with treatment lasting for 8-10 weeks.

Animals treated using one of the compounds, CLP290, started to show promising evidence of functional recovery within 4-5 weeks, and significant recovery from 7 weeks onwards. In fact, 80% of the paralyzed SCI animals developed the ability to take weight-bearing steps, and demonstrated increased joint mobility following treatment with CLP2900. “The extent of the recovery is functionally significant,” the authors state, “as stepping ability has been implicated as the limiting step for functional recovery in severe injury models.”

Further investigation confirmed that the beneficial effects of CLP290 treatment in SCI animals were dependent on the presence of descending axons that crossed the lesion site. CLP290 didn’t restore movement in another cohort of animals in which SCI had completely severed the spinal cord. There was also no evidence that CLP290 triggered the growth of new axons in the SCI animals with spared neurons, adding weight to the suggestion that the drug effectively reawakened the ability of pre-existing nerve cells to respond to brain signaling.

CLP290 activates the K+–Cl– co-transporter KCC2, and in another series of tests, the researchers mirrored the effects of CLP290 therapy by delivering the KCC2 gene directly into SCI mice. These animals also demonstrated a level of functional recovery that was equivalent to or even greater than that observed after treatment with CLP290. SCI mice receiving the KCC2 gene demonstrated levels of KCC2 expression that were similar to those of uninjured mice, suggesting that the gene therapy “likely acts by counteracting SCI-induced KCC2 downregulation,” the authors suggest.

Using gene delivery of CLP290 to restore KCC2 allows the inhibitory neurons to receive and respond to inhibitory signals from the brain, which recenters the signaling circuit, making it more responsive to instructions from the brain. Tests confirmed that enabled the relay of descending inputs to the lumbar spinal cord. “… these findings suggest that increasing KCC2 activity restores a more physiological neuronal activity pattern to the local spinal cord circuitry,” the authors state.

“Restoring inhibition will allow the whole system to be excited more easily,” Dr. He notes. “Too much excitation is not good, and too much inhibition is not good either. You really need to get a balance. This hasn’t been demonstrated in a rigorous way in spinal cord injury before.”

Encouragingly, treatment using CLP290 demonstrated negligible side effects in the mice, even at high doses, suggesting that the compound may represent a useful starting point for clinical R&D. “Because the majority of SCI patients have some spared axons, our results suggest that the BBB-permeable small molecule CLP290 could be a promising treatment in these cases,” the authors state.

They acknowledge that CLP290 treatment didn’t completely restore movement in the SCI mouse model, and suggest that further studies will be needed to evaluate combining CLP290 with other drugs, and with other treatments such as rehabilitative training.  Nevertheless, Dr. He states, “we are very excited by this direction. We want to test this kind of treatment in a more clinically relevant model of spinal cord injury and better understand how KCC2 agonists work.”