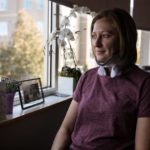 ENGLEWOOD, Colo. — Forty-five days after the accident, Nikeela Black sat in her room at Craig Hospital cataloging all she could remember.

She recalls telling the three other riders to keep their horses in their lanes right before her fourth race of the day, two wins already under her belt. After breaking from the starting gate, memories turn to flashes — yelling, screaming. Later, helicopter propellers.

Nikeela’s memories largely stopped after her horse fell during a race at the Eastern Idaho State Fair in Blackfoot on Sept. 2. She has no recollection of her trip to the emergency room in Pocatello or the air ambulance flight to the University of Utah hospital in Salt Lake City, her sister Tereva Black by her side.

Arguably the best female horse jockey in Idaho, Nikeela Black, also known by her married name Nikeela Abrams, was paralyzed from the ribs down. She suffered a lacerated tear duct, broken nose, degloved chin, four breaks in her neck, a collapsed lung and completely shattered vertebrae.

After the accident, doctors set about the 11-and-a-half-hour process of surgically correcting the damage Nikeela sustained from the trampling of horses.

Nikeela’s husband of two years, Lee Abrams, wasn’t able to accompany her on the emergency flight. He drove alone, arriving at the hospital when Nikeela was already in surgery.

“I just remember looking at the clock,” he said. “It was about 6:35 a.m. when they finally put the last stitch in.”

Afterward, Lee sat next to his wife in the intensive care unit while she tried to write words on his hand, a breathing tube impeding her ability to speak.

Eight days later, a representative from Craig Hospital — world-renowned for specializing in brain and spinal cord injuries — flew to Salt Lake City for Nikeela’s entry interview. In two days, she was on another medical flight for Craig in Englewood, Colorado.

“When we got to Craig, we were still very much in crisis mode,” Nikeela said.

The couple did not know what to expect when they arrived in Colorado, but after five weeks of treatment, Nikeela is further along in her recovery than many patients with similar injuries are in a year.

Now at Craig Hospital, Nikeela spends every day, 8 a.m. to 4 p.m., in a series of therapy sessions designed to strengthen her to be as independent as possible while navigating the world in a wheelchair.

The hospital’s occupational therapy program teaches patients how to go about their daily life — from child care to vacuuming to entering the bathtub. A full-sized car, which was crane-lifted into the hospital, allows patients to practice getting in and getting out of a vehicle.

Craig’s therapeutic recreational department schedules activities for patients, from hiking to hot air ballooning, and brainstorms ways for them to continue doing what they love. Last week, the department staff rigged a saddle that Nikeela was able to ride as it was pulled around a therapy room.

“It was really nice to be back in the saddle,” she said.

But getting back in the saddle isn’t Nikeela’s only wish, she aimed for something else — getting back into a dress. As an attorney, nearly all of her wardrobe is comprised of work dresses, which she feared she would have to get rid of after the accident.

On Tuesday, with the help of occupational therapy staff, Nikeela was able to get herself into a flowy, black-and-white dress with red stripes, cinched at the waist with a matching red belt.

“I walked in, and she had a dress on,” said Lee, shooting his wife a look. “Some people might not think about it, but it was huge for her.”

Nikeela flew down a hospital ramp in her wheelchair, outstretching her hand for high fives from passing nurses and patients.

“Let’s go again,” she said during a physical therapy session to her trainer after struggling to complete an exercise. Rarely does her face show pain or frustration.

She likes to cross things off her list, Lee said.

Nikeela didn’t hesitate when asked if she ever wants to get back on a horse.

There are good days and bad days. Bad days come in the form of muscle spasms in Nikeela’s back — now adorned with a 12-inch scar from surgery — but, no matter what day, she hasn’t missed one session during her five weeks at Craig.

“It gets easier each week,” she said. “I remember the first week thinking I was going to die.” The busy therapy schedule gives her small windows to eat meals and sleep. In the early days of the accident, she had to be turned at night to prevent pressure sores on her skin.

Nikeela was still in the intensive care unit when she began calling her Boise office to check in on clients. She plans on getting back to her law practice as soon as possible. That goal means learning to drive after getting her neck brace off in six more weeks.

“But I want to make sure that I am ready to go back,” she said.

“I’ve had several good friends who have been paralyzed from horse racing within the last five years,” she said. “I knew the risks.”

Before arriving in Englewood on Sept. 12, Nikeela had spent a maximum of one hour in a wheelchair. Now, she is picking out her own.

Personalizing her wheelchair means a range of decisions Nikeela had never considered before, from frame (box frame), size (15 inches), type of metal (titanium, for better shock absorption), seat material (gel, for comfort and stability), number of spokes (fewer, for less chance of catching her fingers), among a laundry list of other specifications.

Nikeela was taken aback to learn that the chair was being made by TiLite Wheelchairs, a custom wheelchair company based in her hometown of Kennewick, Washington.

At Craig, her challenges include building endurance in her arms, building confidence to transfer from her chair to uneven surfaces and learning to lower herself down flights of stairs in case of emergencies.

But no matter how much Nikeela practices, it seems there is always another step she didn’t foresee. She recounted one day, during an outing, being excited that she was able to go off and buy an ice cream cone herself, then realizing she couldn’t push her chair with one hand.

On Thursday morning, Nikeela boarded a bus with Craig Hospital patients to make the 45-minute drive to Denver International Airport, where she hadn’t been since she flew in five weeks earlier arriving in Colorado.

Greeted by United Airlines and Transportation Security Administration staff, the group did a run-through of airport security and learned about extra steps they needed to take to travel in a wheelchair. Then they practiced transferring from their chair into airplane aisle wheelchairs.

Without hesitation, Nikeela tipped herself nearly 45 degrees backward to learn how to ride down an escalator. With the help of Craig Hospital staff, she rolled her chair onto the moving surface, arms outstretched on either side grasping the moving rails.

One more goal checked off of Nikeela’s list — she ventured up and down three times.

The cost of adapting to a wheelchair matches the obstacle of learning to use it.

Nikeela admitted she was embarrassed at the $25,000 donation target her sister Tereva Black had chosen for a GoFundMe page set up for medical bills. But now, even with insurance, Nikeela said it’s sad how expensive the equipment is that is essential for her to go about daily life.

For example, an electric “smart drive assist wheel” can reduce stress on joints and muscles from pushing a manual wheelchair. That accessory costs more than $6,000.

Lee Abrams recalled talking with his mother, asking if it was right to ask for donations. She replied that people want to help in any way they can, and if you don’t allow for that, you’re taking that opportunity away from them.

The GoFundMe page has raised just over $45,000 from 303 people since Sept. 3. Treasure Valley Racing, operators of the now-closed Les Bois Park in Boise, also announced last month a new charitable foundation, with some initial funds going toward Nikeela’s recovery.

Lee Abrams — seated on a nearby bench during Nikeela’s physical therapy — tried hard not to intervene.

“Fortunately, I didn’t have to watch the accident,” he said. “And I am thankful for that.”

But now he has to watch his wife go through intensive physical therapy sessions and struggle to complete activities while resisting the urge to help. He only steps in when called on as a “power assist.”

At Craig, Lee helps no more and no less than he should.

“The more independent we are here,” he said, “the easier the transition to home life will be.”

Within the next week, Lee will head home and begin making adaptive remodels to their house in Greenleaf. With guidance from the hospital’s specialists, he plans to widen hallways and doorways and add ramps to areas of the house in preparation of Nikeela’s return home — this time in a wheelchair.

“We don’t know where we are going to be in a year,” said Lee. “She’s progressing, but at the same time she has the injury she has. You have to be realistic.”

When thinking of how much worse things could have gone in the accident, Nikeela and her family are thankful.

“I’m so blessed, for what the injury could have been and what it is,” Nikeela said.

Tereva Black has been by her sister’s side since the crash. She was visiting from Boston when Nikeela was hurt.

“She is glad that the accident didn’t cause brain damage,” Nikeela said. “And that we can still joke together like always. … She stays with me in the hospital while Lee is away, sleeping on the couch in my room at night.”

Nikeela’s hospital room in Utah was filled with so many flowers from supporters, it could have been mistaken for a floral shop, she said. Her room in Craig shows signs of the same outpouring of well-wishes. Cards line the window sill — with two more stacks tucked in the closet.

A small stuffed duck sits on a shelf. Years ago, the stuffed animal was given to a woman after she suffered a similar injury. That woman kept it through years of rehabilitation and upon hearing Nikeela’s story, sent it to her.

“I have never met her,” Nikeela said, “and she gave me her lucky duck.”

Reflecting on the letters, stuffed animals, flowers and donations — big and small — brought Nikeela to tears, along with the thought that many of these well-wishers have never met her; they just want to help.

“That’s the part that gets me the most,” Nikeela said from behind a tissue. “People’s generosity.”