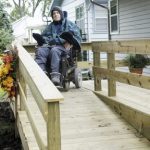 Giving back to a man who was once active in the community through FFA and 4-H, many friends and neighbors helped make it possible for Larry Goehring and his wife Nicky to move back into Fairfield.

Donating time and sometimes material, friends, neighbors, relatives and even a Sunday school class have painted, cleaned, redone wood floors and replaced woodwork around new doors and windows. The house was made handicap accessible through the widening of a few doorways and addition of new decks with ramps.

Larry has been confined to a wheelchair since his neck was broken in a freak farm accident April 1, 1981. He was attempting to right a building that had been blown down by heavy winds when it fell on him.

Due to circumstances, Nicky said they decided it would be best to move back to Fairfield after living near Stockport for many years. Having bought a house in June, she said they didn’t anticipate being fortunate enough to get so much help with the move.

Fred Hickenbottom, who helped some with his wife Dixie, said the Goehrings don’t ask for anything, but people know their predicament, so everyone just pitched in. He said they’ve been good friends for many years.

Sandy Nelson, who has been friends with the couple for more than 40 years, said, “I knew that she needed help, so I was there.”
Nelson said she knew they were planning a move, so she called Nicky to find out what needed to be done and what she could do. She said she was grateful to be able to help.

Repairing a highway: how can we fix spinal cord injury?