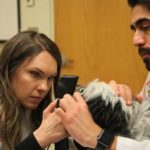 Nearly a decade ago, Dr. Mary Beth Davis was told she would never walk again and that her dream of being a veterinarian was over.

Defying the odds and overcoming numerous challenges, Dr. Davis wheeled herself across the stage in Gallagher-Iba Arena on May 10 to receive her DVM degree from Oklahoma State University Center for Veterinary Health Sciences.

“I’m a very stubborn and independent person,” said Davis, 28. “The moment someone tells me I can’t do something, I’m like, ‘Watch me.’ I’m stubborn, but it’s carried me far.”

Growing up in Guthrie, Oklahoma, just north of Oklahoma City, Dr. Davis never doubted her calling. “I wanted to be a veterinarian as soon as I could comprehend what that meant,” she said. “I hated seeing sick animals, and I was always that person who wanted to make them better.”

Dr. Davis educated herself about the veterinary profession by shadowing local veterinarians, ultimately confirming her instincts. In 2008, she enrolled at Oklahoma State University-Oklahoma City, where she spent her freshman and sophomore years, before transferring to the Stillwater campus in 2010 as a preveterinary sciences major.

After the first week of her junior year, Dr. Davis was homesick and wanted to see her parents. She was changing songs on her iPod when the Chevy Silverado veered off the road. She overcorrected, flipping the truck twice down a steep bank.

The truck’s roof was crushed to the steering wheel, pinning Dr. Davis beneath. Fortunately for her, she was wearing a seat belt and the truck landed right-side up. A police officer, noticing the dust the Silverado had kicked up, stopped to investigate a few minutes later.

Firefighters spent an hour cutting out the truck floor to release Dr. Davis, who was transported by helicopter to a hospital in Oklahoma City.

“It’s been nine years now, and I still have a pretty vivid image of what that was and my feelings at the time. I remember flipping in the air,” Dr. Davis said.

Lying in a bed in the hospital’s intensive care unit, Dr. Davis learned the C6 and C7 vertebrae in her neck were fractured and that her spinal cord had been severely injured. Doctors said she would never walk again and that her plans of being a veterinarian were over.

“That was almost harder to take than hearing I couldn’t walk again,” Dr. Davis said. “It crushed me to hear that something I’d dreamed of doing my entire life is now gone in a split second.”

She reluctantly came to terms with the situation during the eight weeks she was hospitalized. “Everyone goes through a period of denial, thinking it’s temporary. Then it sets in how serious this is,” she said. “Nobody handles it well in the beginning. I don’t know anybody who has a smile on their face when they hear that news, but it’s something you go through.

“It’s a grieving period, just like the loss of a family member.”

A supportive family, stubborn nature, and faith in Christ got her through the dark moments, she added.

Dr. Davis had returned to school by the spring of 2011. It was one class, but it was enough. “Being a student is natural for me,” she said. “I remember being in the hospital thinking, ‘When can I get back to school?'”

Davis graduated in 2014 and was notified she’d been accepted by OSU’s Center for Veterinary Health Sciences. She waited a year before pursuing her veterinary degree because, as Miss Wheelchair Oklahoma 2014, she wanted time to advance her platform of promoting health and nutrition.

Being in a wheelchair allows Dr. Davis to connect with people in the veterinary clinic on a level that her able-bodied classmates might not experience. “Nothing compares to the joy of talking to, inspiring, and motivating a person and them doing the same to you,” she explained.

Dr. Jerry Ritchey, professor and head of the Department of Veterinary Pathobiology, had no experience teaching a person with Dr. Davis’ physical limitations. Initially, Dr. Ritchey saw her as “the student in the wheelchair,” but soon realized Dr. Davis was far more than that, that she was an ambassador and a teacher.

“I learned from her about her struggles and successes, the ingenuity required to accomplish simple daily tasks that I always took for granted,” Dr. Ritchey explained. “She was always open, honest, and sincere. Her journey speaks for itself. She provided me confidence to approach and interact openly with any wheelchair-bound person.

“In the end, I guess I no longer see a ‘student in the wheelchair,’ I just see a young lady that is about to be called doctor.”

That doesn’t mean Dr. Davis isn’t occasionally frustrated. She wants to keep up with her classmates, doing all the examinations and procedures they’re doing despite a slight lack of motor function in her right hand and having to work from a seated position.

“We’re mostly able to adapt to those obstacles and overcome them, but some things just aren’t doable, and that’s just the way it is. I tellmyself to get over it and move on to the next thing,” she said.

After graduation, Dr. Davis hopes to join a small animal practice in Oklahoma. She thinks she’ll spend a year or two there before possibly starting down the road to becoming a board-certified veterinary ophthalmologist.

Dr. Davis says she hasn’t experienced any discrimination as a result of her disability. For a time she included the Miss Wheelchair Oklahoma title on her resume as a courtesy to potential employers; she thought it inconsiderate not to alert them to the fact that she was in a wheelchair. Now she no longer sees the need.

“I’ve come to a place in my life where I know I’m to be able to do the job, just like every other veterinarian,” Dr. Davis said.