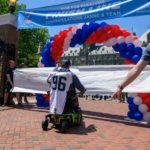 Janne Kouri raised a fist and rode his electric wheelchair through an arch of red, white and blue balloons set up between Georgetown’s Healy Gates on Wednesday, as dozens of friends and family members cheered his long-awaited arrival. When Kouri began creating the itinerary for his 2,900-mile, two-month ride to raise funds and awareness for people living with paralysis, a cross-country journey that began on March 11 at his home in Manhattan Beach, Calif., there was never a question it would end here.

“Georgetown has been a fantastic support and resource system for us, and it just lives in his heart every day,” said Kouri’s wife, Susan Moffat, who joined her husband in four cities during the ride and was waiting for him at the finish line. “At first I asked him, ‘Do you want to finish in New York?’ but it was always D.C., and it was always on the campus of Georgetown.”

Kouri grew up in Connecticut and New York, but from 1993 to 1997, the Hilltop was his home. He was a standout defensive lineman for the Hoyas football team, being named the 1996 Metro Atlantic Athletic Conference defensive player of the year as a senior and finishing his career as Georgetown’s all-time leader in sacks.

“This place and these people have always meant so much to me, so it’s just incredible that they came out here to support this entire journey,” said Kouri, whose No. 96 jersey was draped over the back of his wheelchair. “Knowing that they were there supporting us while we were riding was extremely motivational.”

In 2006, Kouri was working for a digital entertainment company and playing in a beach volleyball tournament near Los Angeles when he dove headfirst into the ocean after a match. He hit a sandbar and broke two vertebrae in his neck, leaving him completely paralyzed. While he was in the ICU, doctors told him he would probably never walk again. Kouri refused to accept that prognosis and, frustrated by the lack of progressive recovery options in California, moved with Moffat to Louisville to undergo Locomotor Training therapy at the Frazier Rehab Institute for a year.

Kouri, who took steps without a walker about a year and a half after his injury but still uses a wheelchair in his daily life, saw dramatic improvements in his health and returned to California with a new mission in life. He founded NextStep Fitness, a nonprofit dedicated to making rehabilitation resources accessible and affordable to those living with paralysis, and opened NextStep’s first paralysis recovery center in Los Angeles in 2007. NextStep facilities have since opened in Atlanta, Kansas City, Orlando, Raleigh, Phoenix and Las Vegas, and his rehabilitation and fundraising work have been featured on ABC’s “Good Morning America.”

Kouri said the idea for the Ride for Paralysis was planted about two years ago, when several of his friends completed a bike ride from Denver to Los Angeles to raise money for NextStep’s scholarship fund for wounded service members.

“He said he wanted to do something as big and profound as that, and when Janne does things, he does them in grand fashion,” Moffat said.

Anderson Bell, a friend of Kouri’s from Georgetown, loved the idea, and rode his bike alongside Kouri for the entire trip. Nic Good, a documentary filmmaker from South Africa, drove a trailer full of equipment and supplies, including the special Bowhead electric bike that Kouri rode for part of the journey. Other friends and supporters, including several of Kouri’s former Georgetown teammates, joined the ride for 50- to 100-mile stretches.

“It was way better than we could’ve expected,” said Bell, who popped a bottle of sparkling wine and toasted Kouri after they crossed the finish line. “I’m not quite sure we want it to end.”

Kouri’s coach at Georgetown, Bob Benson, joined the trip for a 74-mile stretch through Arkansas. Current Georgetown Coach Rob Sgarlata, who was a senior running back for the Hoyas in 1993 when Kouri was a freshman, took a train to Richmond on Sunday night and rode the final 130-mile leg to D.C. Sgarlata actually began his coaching career as an assistant at Georgetown in 1994 working with the defensive line, which was led by Kouri.

“He made me look really smart,” Sgarlata joked.

Sgarlata has invited Kouri to address his team several times since being promoted to head coach in 2014 after a 10-year stint as the Hoyas’ defensive coordinator. He marveled at the inspiring bond Kouri has formed with former Georgetown linebacker Ty Williams, who was paralyzed in 2015 after fracturing a vertebra during a game. Williams, who a year ago walked for the first time since his injury — across the stage at his graduation, no less — was among the crowd on Wednesday.

“It’s crazy,” said Williams, who followed the ride’s progress on Instagram. “You say L.A. to D.C., but then you see it, and you’re like, you started when? And you’re done now? Two and a half months, that’s quite the commitment. He’s not doing it for himself, he’s doing it for everybody else, so that’s just really impressive to see someone take that on.”

Kouri and Bell both said they would remember the trip by the people they met en route to Georgetown, including a mother and daughter who waited for hours on the side of the road outside of Little Rock on Easter Sunday with cold water bottles, not knowing exactly when Kouri’s team would arrive.

“It’s moments like those that made a huge difference, and a lot of the veterans we met along the way,” Kouri said. “It was just amazing and inspiring in many ways, and also sad in some ways, meeting people who are living with disabilities, or whose family members are living with disabilities, and who don’t have access to the resources that they need. That’s the whole mission.”

Special thanks to everyone @galileorecovery for their support of our #rideforparalysis Our our clients @nextstepla benefit from the Galileo on a daily basis and it has been invaluable for the riders and my recovery on our journey across the US. I HIGHLY recommend it! @nextstep_raleigh @bowheadcorp

Kouri said it only rained a couple of days during the trip, and while participants dealt with their fair share of flat tires and other equipment issues, they mostly stuck to the original itinerary. Most of their nights were spent at hotels along the route; they almost never stayed for more than one night in the same place. Perhaps the closest anyone came to a serious injury was 10 days into the ride, when Kouri threw the ceremonial first pitch at a Cincinnati Reds spring training game in Goodyear, Ariz., and was hit in the head by a ninth-inning home run ball.

“I got my head down just in time and it skimmed off the top of my head, like a rug burn,” said Kouri, who kept the ball as a memento.

At the end of a journey that helped raise more than $300,000, Bell reflected on what he’d learned about his friend over two months spent mostly on the road.

“It just confirmed he’s an incredible human,” Bell said. “I feel lucky to be able to have this experience with a guy like that. It comes around once in a lifetime.”

While this particular ride will never be replicated, Kouri suggested there are more grand adventures to come.

“We’re already planning one for 2021,” he said. “We have three different ideas, but it’s already in the works.”

A few words from the man behind the mission @califinn and the inspiration for my decision to take on this challenge. Thanks again for all of the support. #rideforparalysis Donation Link in BIO