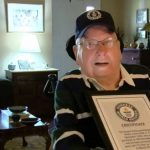 GAUTIER, Miss. (WLOX) – Claiming a world record is never easy, but one man in Gautier has had a longer road to a record than most.

“Since a spinal cord injury in my late teens, I’ve been paralyzed,” Lewis said.

Lewis was in a car accident on his way home from a family Thanksgiving gathering on Nov. 29, 1959. The accident left him paralyzed from the neck down for the last 60 years.

“I remember nothing until I woke up in the hospital in Memphis maybe two or three days later,” Lewis said.

Paralyzation was not immediate as Walter spent much of his time in physical rehabilitation.

“Then came back here and gradually saw that nothing was gonna change, but perhaps being in the rehabilitation center and seeing so many people far much worse off than I was was a big help,” Lewis said.

It wasn’t until March 23, 2020, at the age of 80 that Lewis was given the title of the world record holder, something that he explains with a big smile.

“If you go to the Guinness World Record page, I just went to check to make sure, and enter ‘longest living quadriplegic,’ pow! There you’ll see Walter Lewis.”

Promise for the paralyzed