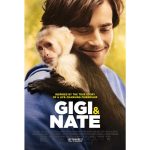 As far as by-the-book, feel-good dramas go, “Gigi & Nate” has a fail-safe formula, designed to jerk tears and warm hearts. The film tells the true story of an 18-year-old who becomes a quadriplegic after contracting meningitis from a lake swim. Unable to eat, sleep or do everyday tasks without help and crushing pain, the Nashville-based Nate (Charlie Rowe) struggles with despondence until Gigi, a capuchin monkey, transforms his life.

Yet the tender bond between the titular pair gets short shrift in Nick Hamm’s bloated movie, stuffed as it is with subplots, characters and contrivances. After an overlong prologue shows Nate frolicking in the water on the Fourth of July with his siblings and friends, the film jumps cursorily through several years of his life with quadriplegia before he acquires Gigi.

The film’s aggressively unsubtle score notwithstanding, Gigi’s effect on Nate is touching. Once she warms to him, she operates his phone, flips through the pages of the books as he reads and helps him with physical therapy, imbuing him with a renewed zest for life. There are also some high jinks involving Nate’s quippy, vodka-swigging grandma (a thankless turn by Diane Ladd) and a college party where Gigi goes viral.

These antics earn the ire of local animal rights activists, who show up to Nate’s house in ape masks and pelt the walls with fake blood. As the battle between these cartoon villains and Nate goes to court, the writing becomes painfully platitudinous, skating around the real controversies surrounding the domestication of intelligent primates. Rather than offer insight into the difficult choices facing disabled people, “Gigi & Nate” opts for mawkish wish fulfillment, undercutting the film’s powerful emotional core.

Gigi & Nate
Gigi & Nate is the story of Nate Gibson, a young man whose life is turned upside down after he suffers a near-fatal illness and is left a quadriplegic. Moving forward seems near impossible until he meets his unlikely service animal, Gigi – a curious and intelligent capuchin monkey. Although she is trained to assist Nate with his basic needs, Gigi helps Nate find what he needs most of all: hope. More Information: www.IMDb.com