BBC journalist Frank Gardner on life in a wheelchair 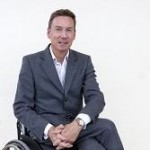 Frank Gardner, the BBC journalist who has spinal-cord injuries after being shot in Saudia Arabia, swaps tales of life in a wheelchair with our writer, who has the same condition

In 2005, my wife Penny watched a news item about the BBC security correspondent Frank Gardner, who had suffered a spinal-cord injury after being shot by al-Qaeda gunmen in Saudi Arabia. He was pictured standing in callipers and taking his first tentative steps. Penny was in the waiting area of the Royal London Hospital; I was in the operating theatre after falling from a tree in which I was working. I had broken my spine, leaving me paraplegic.

From then on, throughout my rehabilitation, the coverage of Gardner’s experience offered a little insight into what lay ahead. When I finally meet him to discuss his latest book, Far Horizons, which is based on his travel diaries and sketchbooks from the past 30 years, he looks fitter and more tanned than he did when he was the news. We are at Television Centre; he continues to be a familiar part of the BBC’s news coverage.

I am curious to know how his experience of spinal-cord injury compares with mine. As someone whose story is well known, he has less explaining to do, he says. “Every now and then I come across people who don’t know. I was having lunch with the Foreign Minister of Lebanon and he asked, ‘Why are you in a wheelchair?’ and it was quite refreshing having to tell him. But the most asked question is, ‘Are you still in recovery? Will you be able to walk again?’

“The majority of people who suffer spinal cord injury don’t go back to work. I had a big think about it when I was in hospital and I reasoned, ‘I can go back to doing what I did before. I’m not going to be able to go to places such as Basra, but I can apply my knowledge to current affairs’.”

Travel has always been a large part of Gardner’s life and after his injury he found it difficult to adjust. Leaving hospital in early 2005, after seven months and 14 operations and feeling “absolutely knackered”, journalistic instincts pushed him to take on a day-trip to Geneva to make a film about Osama bin Laden’s half-brother. It was too much.

“He’s the law-abiding part of the family and I thought: a tale of two brothers. You split the screen to show Bin Laden walking down a mountain in Afghanistan and this bloke walking along the Corniche in Geneva. But that was a 14-hour day, two flights there and back and I underestimated how exhausted and fragile I was. I didn’t enjoy that.”

In the past he was able to sink into the shadows and observe, a useful skill for a journalist and one he could apply even in the Middle East as he speaks fluent Arabic. In contrast, being in a wheelchair must feel as though he has a huge flashing light on his head, I suggest.

“You’re absolutely right. I can’t go back to the Middle East in the way that I did before, because I’m in a wheelchair. I can’t wander round the souk, or the backstreets. It’s not a safety thing: I can’t do it in in terms of mobility. Even if there’s not a violent threat, if I was involved in a road traffic accident and an angry crowd built up, I couldn’t get away in a hurry. When I went to Afghanistan last year, I had to do the interviews and pieces to camera on the base.”

As we both know, being in a wheelchair brings out sympathy in people, something that neither of us had experienced before — and not something that we seek. “I certainly don’t want sympathy, but you get it whether you like it or not,” Gardner says. There is also an assumption that we’re incapable of doing anything, I say. I don’t have pushhandles on the back of my chair, because people tend to put their hands on them and then I lose control of my own movement. Gardner smiles with recognition.

“You and I have probably got similar attitudes and issues with it. The biggest problem I have is getting people to give me less help, particularly in developing world countries. I’ve been to Thailand twice since my injury and the Thais have been terribly nice, but offer me more help than I need or want. I had to learn Thai for, ‘It’s OK, I will push myself’.”

Inevitably our conversation turns to the lack of adequate toilet facilities on aeroplanes. But where Gardner has “yet to use the loo on a flight with any dignity”, having to be screened by flight attendants holding up a blanket, I have managed to get the door closed. Admittedly, I then got my foot stuck under the toilet seat and my cuff caught on the tap, which filled my sleeve with water, but at least it was in the privacy of my own cubicle.

Otherwise, Gardner is comfortable asking for help when he needs it. “I’m completely unembarrassed,” he says. “If I need help getting up steps or something, I’ll say to whoever is there, ‘Can you give me a hand?’ It’s quite amusing. I get helped going upstairs by generals and ministers. Prince Andrew very kindly gave me a hand getting my chair into a car the other day. I can usually do it by myself, but he offered. I think people quite enjoy helping. They find it difficult to stand by while I’m coping with taking off wheels and folding the thing up.”

Gardner’s family have accepted his injury and are patient, he says. “We’ve got two girls aged 10 and 11 and they are still pretty envious if I go business class. My wife is very good about pushing for me to get an upgrade. She says that if we’re flying, it’s important that I’m comfortable. I’ve got no padding on my bum, so if I don’t take the weight off [on long flights], I probably would get a pressure sore. I nearly got one in Afghanistan last year.” He has also learnt to be assertive at airports. Recently at Schipol in Amsterdam he was told to surrender his wheelchair and that he would be transported through the airport in another one. He rebelled. “Ludicrously, I ended up escaping around the terminal while this woman looked for me to try and dump me into some Dickensian chair. I’ve adopted a policy of refusing to get off until they bring my wheelchair to the plane. These things cost a lot of money. And it’s our legs.”

Has his extensive travelling helped him with his rehabilitation? “It probably did, although for much of the seven months I was in hospital I was very weak. I was a very different person mentally to who I am now. I’ve gone back to how I was, I think. I realised fairly quickly that I had to regain as much independence as possible. So I relearnt how to drive, how to ski and how to scuba-dive.”

Last year Gardner (who can walk short distances with assistance) and a friend backpacked round Cambodia, with no fixed itinerary. Travel in particular requires one to throw open the doors to uncertainty and sa: “OK, I’ve no idea where this is going to lead but I’ll step through.” Gardner nods with recognition.

“Weirdly, I find that uncertainty quite liberating. I experienced it last year in Cambodia. We got to Phnom Penh airport to hop on a plane to Siem Reap, where Angkor Wat is, and even though I’d warned them that I’d be in a wheelchair, we got to the plane, there was a monsoon and the only way to get on the plane was for the co-pilot to give me a piggyback up the steps. So that’s what we did. I don’t know which one of us was laughing most.”

Does he have any unfulfilled travel ambitions? “I’m very keen on wildlife, wild birds, especially. When I was in hospital I thought, ‘Damn. I always wanted to go to Papua New Guinea and see the bird of paradise. Now I’ve left it too late’. But that isn’t true because there’s this scientist called Stuart Butchart. He’s in a wheelchair and he has a higher level [spinal-cord] injury than me, and he went last year. His job takes him to these places, and I’m envious rather than jealous. I find it inspiring. He’s been snorkelling with killer whales in the Arctic. I could do without that, but I’d love to dive in the Galapagos.”

Far Horizons, by Frank Gardner, is published by Transworld Publishing and is out now.

Paraplegic rats walk again after therapy, now we know why